Disable (かなしばり, Kanashibari?) is Mewtwo's Down Special Move. Mewtwo shoots out a short beam from its eyes in front of itself, and any opponent that is facing it will be Stunned for a short period.

Disable will also send foes flying anytime they are in either stunned because of a shield break, or in an aerial tumble. Also, if the enemy is rolling up a ledge using the R or L button, disabling them right at the end of the roll motion will cause them to get launched off the stage as well. The move is often considered impractical due to its short, narrow range (the opponent must be very close, in front of Mewtwo and at approximately eye level), but it can be used to disrupt an advancing enemy or stun them for a charged Smash attack. The effect of the stun will last longer the higher the foe's damage is. If the move is performed on an already stunned opponent in Melee, they will take knockback and 1% damage, but will recover when they land, but this was removed in 3DS/Wii U. 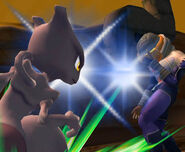 Mewtwo using Disable on Pikachu, Jigglypuff, Greninja and Charizard and it missing.
Add a photo to this gallery

Disable is a non-damaging Normal-type move Pokemon games that will disable the last move used by the opponent for 4 turns. It behaves much differently than in Super Smash Bros. as it cannot cause confusion on the enemy in the Pokemon games. Instead, it much more resembles the effects in the Mystery Dungeon spin-off series where Disable will paralyze the opponent instead of disabling the opponent's attacks.

Retrieved from "https://supersmashbros.fandom.com/wiki/Disable?oldid=573867"
Community content is available under CC-BY-SA unless otherwise noted.