Dimensional Cape is the name of Meta Knight's Down Special Move. It seems to have debuted in the first trailer, when Meta Knight avoided Pit's Palutena Arrow. It is apparently different or toned down from the trailer appearance, much like the Wario Waft. When describing down special moves, Dojo!! states that "Many of these do unusual things, like reflect enemy attacks," suggesting that the Dimensional Cape has such a property, especially from what the trailer showed. This is not true; if you swirl your cape around Meta-Knight when the projectile hits, it will not be reflected. The slash after the Dimensional Cape does around 14% of damage, and has some knockback. Many players disregard the cape, but it is very useful for surprising opponents, making recovery less predictable and for edgeguarding.

It actually makes Meta Knight teleport for a short distance in any direction; then you can push the attack button to slash in the direction you wanted to go. It can be used to disappear from projectiles, even attacks. Another quick tip for using this move: When you press Down-B, move the control stick in anyway you want to as normal, but don't let go of the B button and Meta-Knight will perform the technique AND slash with little effort.

Meta Knight can use this move as a recovery move, but afterwards, he will enter Helpless state. This move is commonly used as edgeguarding. This is an extremely "flashy" move, and is often used for showing off.

The Dimensional Cape can be used for edgeguarding in a number of ways. A few of these are listed here:

Dashing Dimensional Edgehog: Dash toward the edge and use the Dimensional Cape. If you were at the right distance, Meta Knight will fall over the edge and grab it. You have a very small DI influence, so you can lean toward the edge slightly if you are about to SD. Doing this technique at the wrong distance will result in either an SD or not reaching the edge. It is used to reach the edge quicker for edgehogging.

Dimensional Edgestall: By pressing down on the control stick/pad and the special move button, Meta Knight will perform the Dimensional Cape while falling slightly off the edge. Quickly tap the control stick upward, then return it to its neutral position. If done correctly, Meta Knight will reappear right on the edge, and will grab it. This can be used to create an endless edgestall. You can also use the cape without tapping the stick downward or moving it after you initate the move, resulting in dissappearing and reappearing in place. If done wrongly however, this will usually result in an SD.

Dimensional Edgeguard Punish: By performing the first part of the first Dimensional Edgestall method above, but by keeping hold of the special move button and keeping the control stick pointed upwards, Meta Knight will reappear right next to the edge and perform the slash, punishing edgeguarders. You can move slightly to the left and right by holding the stick diagonally upward.

This move is likely based off of Meta Knight's ability to teleport using his cape in the Kirby games. Usually, after he is defeated in the games, his mask falls off, and after realising this, he wraps himself in his cape and jumps, disappearing. It is not too much of a stretch to suggest Meta Knight could use this technique as a sneak attack. However, Meta Knight prides on honorable fighting. 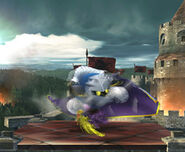 Retrieved from "https://supersmashbros.fandom.com/wiki/Dimensional_Cape?oldid=155923"
Community content is available under CC-BY-SA unless otherwise noted.