Taro Kudo
Dillon (ジロー, Jiro) is the titular silent protagonist from Dillon's Rolling Western and it's sequel, The Last Ranger. Dillon is an armadillo with yellow skin and a red shell. He wears gloves, boots, a belt, a blue bandanna, a cowboy hat and has a scar under his left eye. He fights by using a combination of rolling and slashing techniques.

Dillon appears as an Assist Trophy in this game. He appears and tips his hat once before performing rolling attacks several times. His first few attacks have him charging up with a red tint, which does multiple 4% hits before he recoils back. His last attack is tinted yellow, and the charge can trap opponents into the final hit, which deals 18%, high knockback, and sends opponents offscreen along with himself where he disappears. If he falls offstage before the final spin attack, he will teleport back onstage. Like a few other assist trophies, he can be defeated by taking enough hits, whereby he falls on his chest defeated.

Dillon appears as a blue item in Smash Tour: when used, it will cause all other players encountered during that turn to be launched.

Only one armadillo can save the village from a Grock invasion, and that's Dillon, a.k.a. the Red Flash. With his trusty claws and roll attacks, he'll take them out one by one. If you summon him to the battle, he'll launch a devastating roll attack and follow it up with his ultimate technique, Arma-Charge, to send foes flying!

Dillon returns as an Assist Trophy. This time, he is based on his appearance in Dillon's Dead-Heat Breakers.

Dillon’s official artwork in Super Smash Bros. for Nintendo 3DS and Wii U 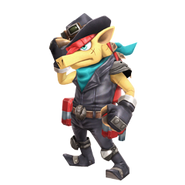