This article is about Diddy Kong's appearance in Super Smash Bros. for Nintendo 3DS and Wii U. For other uses, see Diddy Kong.

Diddy Kong is a starter character in Super Smash Bros. (Wii U and 3DS). Sakurai has stated that Diddy is returning as a veteran fighter from Super Smash Bros. Brawl with increased flexibility and longer attack range. Diddy was announced on February 21st, in celebration of the US and European launch of Donkey Kong Country: Tropical Freeze.

Despite being a Top Tier in Brawl, Diddy recieved many buffs that further increases his versatility. His appearance and proportions now reflects his apparition in Donkey Kong Country Returns.

Jab: Swipes twice with his hands and then turns around and kicks back.

Infinite Jab: Swipes twice and then swipes with his tail repeatedly

Side Tilt: Leans forward and punches with both fists

Up Tilt: Swipes in an arc above him

Down Tilt: Claps in front of him

Side Smash: Swings with one fist and then spins around to strike with his fist a second time

Down Smash: Spins around, sweeping his legs across the ground on each side

Ledge Attack: Gets up on the ledge, turns around and hits with his tail

Get-up Attack: Stands up on one hand and kicks to one side and then using the same leg kicks over his head on the other side

Neutral Air: performs a cartwheel in midair, hitting with all of his limbs

Back Air: Kicks behind him with one foot

Up Air: Kicks above him with one foot

Down Air: Puts his fists together and swings them downwards between his legs

Grab: Swipes in front of him with both hands

Forward Throw: Hurls the opponent forward with one hand

Back Throw: Hurls the opponent backwards using both hands

Up Throw: Tosses them above him and the flips upside down to perform an upward kick to the opponent

Down Throw: Does a hop and bounces the opponent on the ground beneath him, launching them behind him at the end of the move

Up Taunt: Diddy flips his hat and lands it on his head

Side Taunt; Diddy holds both his hands to the side and shakes his head, making a horse-like noise with his lips

Down Taunt: Diddy hops and claps

The Banana Peel Diddy throws when you use his down special can be picked up and used against you, so be careful. His Monkey Flip side special is a rolling leap followed by a grab (or a kick if you press the button again midjump). If you grab someone, press the button again to attack or jump off them to go high into the air. 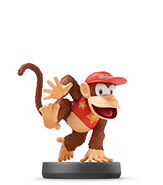 Retrieved from "https://supersmashbros.fandom.com/wiki/Diddy_Kong_(Super_Smash_Bros._for_Nintendo_3DS_and_Wii_U)?oldid=494843"
Community content is available under CC-BY-SA unless otherwise noted.