Originally, Diddy Kong was conceived by Rare as a redesign of Donkey Kong Jr., but Nintendo realized the new design was too different from the original. They advised Rare to either change the design back or make this new design an entirely new character, to which Rare opted for the latter.

Diddy Kong is a monkey who is Donkey Kong's nephew and is the main character in Donkey Kong Country 2: Diddy's Kong Quest and Diddy Kong Racing. He has a girlfriend named Dixie Kong.

In Donkey Kong Country, Donkey Kong hires Diddy to guard their banana hoard from people who might want to steal it. Overhearing this, King K. Rool sends an attack on Diddy, who is beat up and tossed in a barrel and thrown into the bushes. Donkey Kong soon finds and frees him, and the two set out on an adventure to get the bananas back. In the game, Diddy Kong was used either for two player mode, or as a sort of level continue. As long as either Donkey Kong or Diddy Kong were alive, a life was not lost. The missing teammate could then be retrieved by breaking open a barrel with the letters DK on it, similar to the one Diddy was initially trapped in.

At some point, Donkey Kong and Diddy make a bet with Cranky Kong that they can't do their original adventure again on weaker hardware, which leads the the events of Donkey Kong Land.

Prior to the events of Donkey Kong Country 2: Diddy's Kong Quest, the Kremling Krew capture Donkey Kong and take him to Crocodile Isle. Diddy calls upon Dixie Kong and go after the kremlings, eventually defeating Kaptain K. Rool and rescuing DK. DK and Diddy later get captured again on a fishing trip and get contained within KAOS. Dixie and Kiddy Kong end up rescuing both. Diddy continues to be a valuable partner to DK, especially as a member of the DK crew in Donkey Kong 64 and a pseudo-powerup in Donkey Kong Country Returns and Donkey Kong Country: Tropical Freeze.

Diddy Kong is briefly mentioned in Dixie Kong's trophy description. Also, he is mentioned in the DK Rap, which plays on the Kongo Jungle stage. However, despite his prominence within the Donkey Kong series as the secondary main protagonist, he lacks a trophy of his own. 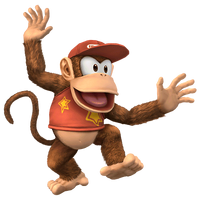 Diddy Kong is a playable character in Super Smash Bros. Brawl, available to play as from the beginning. He uses many unique special attacks, such as his Rocketbarrel Boost, and Peanut Popgun attacks, both of which are used in his Final Smash, the Rocketbarrel Barrage. His small size and little power, combined with the use of weaponry offer a completely different fighting style than Donkey Kong, despite their alleged familial relation. Diddy Kong is the first character created by a European company (Rare) to be playable in the Super Smash Bros series. Due to the strategic use of his banana peels, great comboing potential, good agility, a powerful down air Meteor Smash finisher, and an overall imperessive amount of tournement wins, he is currently in the A+ tier at the very high 4th position on the official tier list. According to Masahiro Sakurai, Diddy Kong was initially planned to be teamed with Dixie Kong, where the two could swap out with each other in the midst of battle, emulating their tagging out mechanic in Donkey Kong Country 2. However, when Sakurai ran into technical difficulties in implementing the idea, he scrapped it, as well as scrapping Dixie Kong as a playable fighter, leaving Diddy Kong as a solo fighter and the lone new playable Donkey Kong fighter.

Diddy Kong
Donkey Kong's little buddy. He's famous for his quickness and his long tail. He usually plays second banana to DK, but he teamed up with his girlfriend, Dixie, to rescue DK when he got captured. He's spent some time playing music and competing in races, and he's also an expert at using barrels. 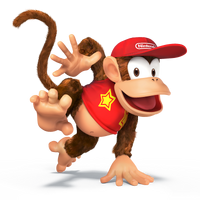 Diddy returns as a playable character in Super Smash Bros. for Nintendo 3DS and Wii U, being revealed on Masahiro Sakurai's official Miiverse page on February 21, 2014 as a celebration for the release of Donkey Kong Country Tropical Freeze in North America and Europe. His design has been updated to almost match his appearances in Donkey Kong Country Returns and Donkey Kong Country: Tropical Freeze. Despite being a top tier character in brawl, Diddy Kong has been buffed as his limbs now stretch farther in all of his attacks along with his KO moves being strengthened. However, his Banana Peel has been severely nerfed as Diddy can only have one out at a time and they now disappear after a foe slips on one or if it hits the ground twice. Notably and infamously, Diddy Kong dominated the competitive play of SSB4 for the first six months following the game's release. Diddy Kong was easy to use and had quick and powerful attacks, alongside effective combos to rack up damage and KOs, including his infamous down throw to up air combo (christened the name "Hoo-Hah" by competitive players). However, as of patch 1.0.6 that was released on April 15, 2015, Diddy Kong received major nerfs to the damage and knockback of several of his most frequently used moves, causing his overall tournament usage to decline.

Yet, regardless of the above, Diddy Kong ranks 3rd on the current tier list, placing him in the S tier. He still retains his fantastic mobility, and a strong combo game thanks to his generally low knockback, quick frame data, and long reach despite his small size. He also has a few usable finishers, such as his smash attacks and Monkey Flip. His biggest flaw, however, is his recovery: Rocketbarrel Blast. He is required to charge it up to gain any decent distance, leaving him incredibly open to edge-guarding, and the rocket barrels themselves can be detached by any attack, leaving him helpless. Despite his heavy nerfs in updates, Diddy Kong's positives still remain notable, still allowing for excellent tournament representation and results, with his current tier placement possibly being a result of nerfs to other top-tier characters after he himself had been nerfed, such as Sheik and Zero Suit Samus, allowing him to rise above them.

Diddy Kong
Donkey Kong's trusty partner. He sports his signature look: red hat, red shirt, Rocketbarrel Pack. In Smash Bros., he's incredibly agile. Charge the Rocketbarrel Pack by holding down the button before launch, and you can steer with left and right. Don't forget to drop banana peels—enemies love it!

Diddy Kong (Alt.)
The Banana Peel Diddy throws when you use his down special can be picked up and used against you, so be careful. His Monkey Flip side special is a rolling leap followed by a grab (or a kick if you press the button again midjump). If you grab someone, press the button again to attack or jump off them to go high into the air.

Diddy Kong returns as a playable character in Super Smash Bros. Ultimate, though he is unlockable for the first time in the series. He has a new Final Smash, Hyper Rocketbarrel.