Dialga (ディアルガ, Diaruga) is a legendary Pokémon from the Pokémon universe.

Dialga appears in Super Smash Bros. Brawl, as a stage Pokémon and a hazard. It appears on the Spear Pillar stage. During play, it can use five different abilities:

Dialga
A Temporal Pokémon. This Legendary Pokémon is talked about as a deity in fables passed down through generations in the Sinnoh region. Identifiable by the diamondlike crystal in the center of its chest, Dialga is said to have set time in motion at the moment of its birth. Its fearsome Roar of Time attack is so powerful that it must refrain from attacking on its next turn.

Dialga appears in Super Smash Bros. for Wii U as a trophy.

The concept of time has always been one of the world's great mysteries, but Dialga might hold the answer. Legend has it that Dialga's birth caused time to begin moving! It's no surprise that the people of Sinnoh see this Pokémon as a deity. If you're ever running late, maybe you could ask Dialga to do you a favour and turn back the clock. 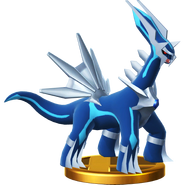 Dialga's trophy in Super Smash Bros. for Wii U.

Dialga as a Stage Hazard on Spear Pillar in Super Smash Bros. Ultimate. 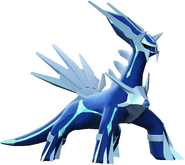 Add a photo to this gallery
Retrieved from "https://supersmashbros.fandom.com/wiki/Dialga?oldid=583562"
Community content is available under CC-BY-SA unless otherwise noted.