Devil World
The Devil (called Demon on the British version of the Dojo) is the villain in the NES title, Devil World, developed by Shigeru Miyamoto, which was released for the Japanese Famicom and PAL NES systems only. In the game, he tried to thwart the efforts of the heroic dragon Tamagon to destroy him and seal Devil World away for eternity. During play, he would point in various directions to move the screen much as he does in Brawl, as well as direct his minions towards the player.

In Super Smash Bros. Brawl, Devil appears as an assist trophy. He points in various directions, which then causes the screen to scroll in the opposite direction, effectively altering the offscreen boundaries of the stage. The effect is great enough that it can leave just a small section of the Battlefield remaining. This is unusual, as it results in no benefit for the player that releases it, except that it makes opponents easier to KO; although the same can apply for any player.

An interesting factor to note about the Devil is that his sound effects have not been updated for Super Smash Bros. Brawl. Whenever he points in a new direction, Devil makes 8-bit sounds identical to those made in the game he originally starred in.

A devil who wields serious power in Devil World. In the game, the devil floats above the maze and commands by pointing. When it gives orders, its cyclopean minions turn cranks that scroll the maze in different directions. When Tamagon, your character in the game, places all the stage's books into a hole, the devil turns into a bat and flies away. It's quite striking, no?

Devil World
Japan and Europe Only

A devil who holds absolute authority in Devil World. When he appears, he'll fly into the sky as a bat and then transform into his devil form. He'll then begin to point frantically in different directions, scrolling the stage where he points. You're...not really helping things, buddy.

Devil in Action on Town and City.

Devil breaking out of Assist Trophy in SSB4. 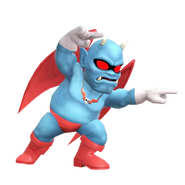 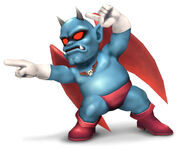