Darkrai appears as a new Pokémon in Super Smash Bros. for Nintendo 3DS / Wii U.

Darkrai only appeared as a trophy in Super Smash Bros. Brawl.

A Pitch-Black Pokémon. It becomes active on nights of the new moon. This legendary Pokémon has the power to lull people to sleep and fill their heads with dreams. Proverbs say that Darkrai will make people have terrifying dreams on moonless nights. A Dark-type Pokémon, Darkrai uses the Dark Void move, along with Embargo, which stops foes from using held items.

When summoned by a Pokéball, Darkrai will wait a second before shooting its Dark Void towards the last place the opponent was which then expands into a bigger void sucking in opponents to the center causing them to fall asleep. When the move is activated in midair, the void sucks any opponent towards its center causing them to gravitate around it, open for attacks, unable to escape until the void wears out.

NA: This Dark-type Pokémon can cause people and other Pokémon to experience nightmares. While it is floating in the air, it tucks its legs in so far, it looks like they vanish! In battle it will use a move called Dark Void, which sucks in surrounding opponents and puts them into a deep sleep.

PAL: A Pokémon shrouded in mystery, Darkrai has the ability to implant nightmares into the minds of both humans and Pokémon. It has legs, but seems to prefer to float in the air. Its favourite move in this game is Dark Void. When this attack hits something, it creates a vortex that sucks in fighters and puts them to sleep. 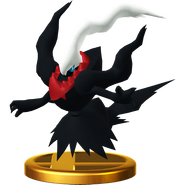 Darkrai's trophy in Super Smash Bros. for Wii U
Community content is available under CC-BY-SA unless otherwise noted.
Advertisement