Dark Samus first appeared in Metroid Prime as the eponymous creature and final boss. The Chozo people who migrated to planet Tallon IV foretold the prophecy of the creature's arrival, and it soon arrived on a Phazon meteorite that infected the planet, forcing the Chozo to flee or hibernate. In one version of the game's lore, Metroid Prime also absorbed Space Pirate weaponry into its biology.

During Samus' mission on Tallon IV, she battles the creature and destroys it, though it attempts to consume her in its death throes forcing Samus to abandon her recently acquired Phazon Suit to escape. As Samus left Tallon IV, the Metroid Prime used the Phazon Suit and the remnants of Phazon around it to take a Samus-like form.

Her final chronological appearance is in Metroid Prime 3: Corruption. She brainwashes the Space Pirates into almost religiously fanatical loyalty, captures a Galactic Federation Aurora Unit and corrupts it to her side before launching a number of Phazon meteor attacks on various planets including the Federation-controlled Norion. A team of hunters consisting of regular Samus, Gandrayda, Rhundas and Ghor manage to destroy the meteor using Norion's defense cannons, but Dark Samus assaults them and corrupts them with Phazon. Though Rhundas, Ghor and Gandrayda succumb to corruption and go insane, Samus resists and ultimately defeats her fellow hunters in battle, with a wraith-like Dark Samus absorbing them immediately after. Samus and the Federation track the source of Phazon to the planet Phaaze, and Samus fights through the heavily corrupting atmosphere of Phaaze in order to destroy her dark counterpart for good.

A twin image of Samus, encountered near the beginning of Metroid Prime 2: Echoes. Dark Samus is identical to Samus in every way but color—she even uses similar attacks. There are many theories on the origin of Dark Samus, but none are proven. Dark Samus uses Phazon for energy and can absorb it to heal damage. Samus encounters Dark Samus a number of times.

Dark Samus was confirmed as an Assist Trophy during the Super Smash Bros. Nintendo Direct. She was shown attacking with phazon based attacks which are cannon blasts, homing projectiles, and summoning tendrils around herself that damage opponents.

This terrifying creature is made of Phazon. Along with regenerative abilities, she can also brainwash her victims and clone herself. Summoned into Smash Bros., she resembles Samus Aran and mimics some of her moves, firing Arm Cannon blasts, launching homing energy blasts, or even unleashing Phazon. 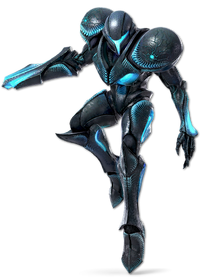 Dark Samus makes her playable debut in Super Smash Bros. Ultimate, fittingly serving as the Echo Fighter of Samus. It retains the same moveset as Samus, though it incorporates Phazon and organic elements in its attacks as opposed to mechanical elements, as well as a more standard roll as opposed to transforming into a Morph Ball like Samus does.