Minami Takayama
Dark Pit (Japanese: ダークピットDākupitto) (ブラックピット, Burakku Pitto?, Black Pit) is a character from the Kid Icarus series. He is a clone of Pit, created after Pit destroyed the Mirror of Truth in the 3DS game Kid Icarus: Uprising. He is almost physically identical to Pit, but wears a black outfit, has black hair and red eyes, and has a more serious and aggressive personality.

Dark Pit is a clone of Pit made by the Mirror of Truth. However, Pit broke the mirror before the cloning process was complete. Dark Pit becomes a neutral character, refusing to side with any of the gods. He serves as a rival to Pit and dons a portrayal of an antihero-like personality. His ability to fly comes from Pandora's powers, which he stole after he and Pit defeated her, allowing him to fly permanently under his own power, unlike Pit. However it's subsequently lost after Pandora's resurrection requiring him to rely on the Power of Flight granted by Palutena or Viridi.

As Dark Pit is the physical manifestation of Pit's dark side, Dark Pit is said to represent the repressed feelings that Pit keeps to himself. Dark Pit is significantly more serious than his jovial counterpart, often having a more dry sense of humor. Dark Pit is more arrogant and cocky, claiming to be the original Pit. Dark Pit is also more aggressive and pragmatic than Pit, often striking opponents when their guard is down. Dark Pit proves to be sharper than Pit, possessing more common sense. This is shown when he deduces that it would take more than one soul to create an Underworld monster.

Although initially antagonistic towards Pit, Dark Pit's personality begins to progressively change. Once he realizes that if Pit dies, he would die as well, he becomes Pit's closest ally, fighting side by side to aid him in rescuing Palutena's soul. And when Pit sacrifices himself to save Dark Pit, he is determined to save Pit at all costs (mostly to save himself).

He is nicknamed "Pittoo" by Palutena, Pit, and other characters (Which is a pun off of "He is pit too."), despite the fact that he obviously hates being called that.

One of Pit's palette swap in this game is a black colored Pit described on Smash Bros. DOJO as a "fallen angel". It's possible that this palette swap served as a basis for Dark Pit's design in Kid Icarus: Uprising since Brawl predates the game. 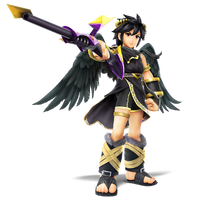 Dark Pit briefly appeared at the end of Palutena's reveal trailer and in the background of her promotional poster, and was later revealed as a playable character from the ESRB leak. He functions mostly as a clone of Pit, down to the very meaning of the word: his entire moveset and even his attributes (such as air speed and dash speed) are completely the same as Pit's, with the only differences between them being two of his specials, Silver Bow and Electroshock Arm, his forward tilt inflicting less knockback than Pit's, and his Final Smash, Dark Pit Staff.

In addition, Dark Pit was originally planned to be an alternate costume of Pit, but became a separate character due to a designer having already modeled the Electroshock Arm, as well as Masahiro Sakurai wanting Dark Pit to have his own Final Smash, the Dark Pit Staff.

Dark Pit
Pit's mysterious, black-clad doppelgänger, Dark Pit. (Some call him Pittoo, but he really doesn't like that.) When he first appears, he immediately goes after both Pit and the Underworld Army. In Smash Bros., he uses moves a lot like Pit's, though both his bow and his Sacred Treasures are different.

Dark Pit (Alt.)
Dark Pit's Guardian Orbitars special puts up shields of light on either side of you to block attacks, deflect projectiles, and push back any enemies who are too close. You can even use the shields to protect against attacks from above and below. If they take too many hits, though, they'll vanish and become unusable for a while. 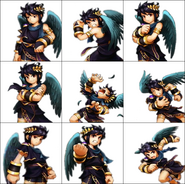