Smashpedia
Register
Don't have an account?
Sign In
Advertisement
in: Attacks, Special Attacks, The Legend of Zelda universe,
and 6 more

Dark Dive is Ganondorf's Up Special Move. It is similar in function to Captain Falcon's Falcon Dive, but instead of the opponent getting hurt by fire, they will be shocked by electricity if Ganondorf connects with them. Like the Falcon Dive, it can be used repeatedly if Ganondorf successfully grabs an opponent, and he can grab a ledge at the peak height of this move when facing the other direction. This helps to sweetspot and to keep Mario players from caping.

The move itself is essentially a clone move of Falcon Dive, except that there are electric effects. He rises up, catching anyone who's above him, and zaps them. He can use this move again after. Also, as with most moves Ganon has compared to Falcon, the move is stronger than Falcon Dive, and is easier to KO foes with. Unfortunately, it cannot grab, or even affect foes on a ledge, making this move extremely easy to edgeguard. 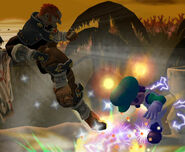 In Super Smash Bros. Brawl, Ganondorf can still grab opponents with his Dark Dive, but if the move does not connect until the end of the animation, the opponent is simply knocked away with Darkness damage. In addition, Ganondorf can now grab opponents hanging onto the ledge, which often stage spikes them, though they can tech it and punish Ganondorf because they can move before Ganondorf can.

The Dark Dive has much weaker knockback in Brawl, deals less damage and can even get punished from grabbing the opponent with it depending on their damage percent and how fast their aerials are. The move is also capable of destroying targets in Target Smash!! when his body comes in contact with the target.

In The Subspace Emissary, Ganondorf attacks Tabuu with his Dark Dive after he finds out that he is controlling Master Hand with his Chains of Light. The distance Ganon travels with Dark Dive seems to be highly exaggerated. Even before he touches Tabuu, he is hit by a counterattack, turning him into a trophy.

Ganondorf jumps, and if he catches the opponent...

...they will be shocked.

Should Ganondorf miss, he has a chance to hit opponents with a Darkness uppercut.

Dark Fists is one of Ganondorf's Up Special Moves that can be used via customization. A two hit move, the first hit knocks opponents into the air, then Ganondorf chases the opponent into the air to follow up with another punch.

Dark Fists, unlike the default variation, is an attack rather than a command grab. For this reason it cannot punish shielding opponents; however, it deals higher damage and can kill most character at just above 100%. It covers the most distance overall out of Ganondorf's up specials. It is also a good combo finisher because of its upward launch which puts opponents into a difficult position.

Dark Vault is one of Ganondorf's Up Special Moves that can be used via customization. The jump is larger than normal, but the grab will only work at the very beginning or very end of the attack.

The Dark Vault is for Ganondorf players that want better recovery. He covers more vertical distance with the move alone, and if he successfully grabs an opponent he leaps much higher into the air; unfortunately, it is difficult to grab opponents with since it can only grab opponents at the very start or very end of the move. It is a command grab which makes it useful for punishing shielding opponents. The move itself deals less damage but launches opponents a great horizontal distance which can make it a good edge-guarding tool.