Danger Wrap is Mega Man's Side Special Move that can be used via Customizations. Mega Man shoots out an explosive wrapped in a bubble that floats upwards, exploding if it comes into contact with anything. If it is used in the air in the beginning and then again at the same frame you land on the ground after launching the first one, another one will pop out. This also works with Ice Slasher.

In Mega Man 7, Mega Man receives this weapon from Burst Man. In this game, it could capture enemies in the bubble, trapping them with the explosive until it goes off. Pressing down and shooting it will put a bomb on the ground without the bubble (this does not happen in Wii U/3DS). It was also Cloud Man's weakness, being the only boss who could be trapped in the bubble.

The Danger Wrap is a great move that despite its unorthodox attack appearance and movement has a multitude of different uses. The move has nearly no horizontal range, but phenomenal vertical range; this vertical range is good for keeping opponents approaching from above out of the way. If an opponent is trying to recover high, the Danger Wrap can make them regret the attempt altogether. Danger Wrap is not very useful against opponents that are planted firmly to the ground. The Danger Wrap can give Mega Man stage control on a stage like Battlefield, since opponents standing on above platforms are easy targets with this move equipped. The move also has impressive kill power, finishing off Sonic the Hedgehog at 80%. A good combo with Danger Wrap at lower percentages is down throw to Danger Wrap. 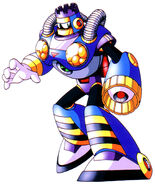 Burst Man.
Add a photo to this gallery
Retrieved from "https://supersmashbros.fandom.com/wiki/Danger_Wrap?oldid=509367"
Community content is available under CC-BY-SA unless otherwise noted.