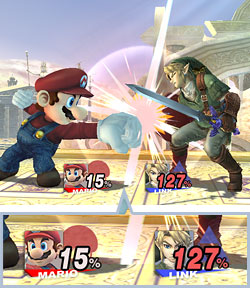 Damage is a measure of how vulnerable one is to the knockback of attacks. A player's damage starts at 0% and can take any decimal number between 0% and 999%; however, the game only displays integers, so a damage displayed as 15% could be any number above 15% and below 16%. At low damages, the player cannot be knocked back very far, and can only be thrown off-stage by the game's most powerful attacks. At high damages, the player is knocked back considerably by most attacks, and is at increasing risk of being KO'd. Though damage is measured in percent, getting to 100% does not mean a character is doomed - the number itself is somewhat arbitrary.

Each attack deals a set amount of damage, which is then modified by things such as Stale Move Negation before the target is launched. An attack that does no damage will not cause targets to flinch and not produce a regular hit sound, although it will still cause knockback. The damage an attack deals is a significant factor in how much knockback it causes.

The following aspects are affected by damage: