Cypher is Snake's Up Special Move. He grabs onto the namesake flying reconnaissance camera to recover.

It will not make him helpless, but will take away his midair jump. One can cancel the ride early by performing any Aerial Attack, by pressing down, by performing any Special Move (other than another Cypher, of course) or by air dodging.

If used in combination with his C4, or Hand Grenades, Snake can have nearly infinite recovery (at high percentages he should tech on a wall to prevent being Star KOed).

While using this move, Snake has a special kind of knockback resistance, ignoring the knockback from any hitbox that deals exactly 7% or less. If he uses it from below, he is extremely vulnerable to grabs, attacks and even spikes as it rises very slowly, but the attack must deal over 7% damage for this to happen.

If Snake is grabbed during this move, and is not thrown or pummeled/hit, he cannot use this move again when he struggles free, unless he is hit after this happens. Special grabs will not let him use Cypher again if it grabs him from above in the way their special grab get canceled by the Cypher projectile.

The Cypher becomes an upward projectile after Snake lets go, preferably tapping down or midair dodging. 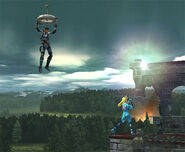 Snake grabs onto the Cypher.
Add a photo to this gallery

Cyphers were the automated flying security cameras that patrolled the bridges between the struts of the Big Shell in Metal Gear Solid 2. A Cypher was also used in the Tanker Incident, taking a photo of Snake standing over the unconscious body of Olga Gurlukovich after winning a gunfight against her, thus allowing the Patriots to frame him for terrorist activities. Though neither Snake nor Raiden ever used one to hitch a ride, this move is a good example of Snake's resourcefulness and wouldn't have been out of place in a Metal Gear game.

Another type of Cypher, Gun Cypher, also appeared in the same game, armed with a light machine gun.

An unmanned aerial surveillance vehicle used by the U.S. Army. It uses a fan in the center of its body to hover and a camera on its upper fuselage to monitor from the skies. It has a number of models, including the armed Gun Cypher and the remodeled Cypher II. Its small size and continuous flight ability make it extremely effective in guarding against intruders.

Retrieved from "https://supersmashbros.fandom.com/wiki/Cypher?oldid=579833"
Community content is available under CC-BY-SA unless otherwise noted.