Cyndaquil will hop into the air and use Flamethrower. Fire will be coming out of Cyndaquil's back. Anyone that is caught in the attack's radius takes damage. Flamethrower has a small attack radius, so it is easy to avoid. Cyndaquil can be KO'd by any character. If it is attacked constantly by other characters (including the summoner) or items, or is hit with a powerful smash attack, then it gets knocked off the stage. Nothing is rewarded for KO'ing Cyndaquil. Cyndaquil's attack does not harm the summoner.

Cyndaquil features as a collectible trophy, unlocked as one of the 100+ trophies that can be collected randomly during normal play, such as in the Trophy Lottery and throughout the various Single-player regular matches. It reads as follows:

Cyndaquil
Cyndaquil frighten easily, so they're often found curled up in balls. When threatened, they flare the flames on their backs to drive off enemies. Cyndaquil was one of three Pokemon that trainers could choose from at the beginning of Pokemon Silver, Gold, and Crystal. No one knows if their eyes are open. (Pokemon Gold & Silver 10/10)

In Brawl, Cyndaquil did not return as a Poké Ball Pokémon, but still appears as a trophy.

Cyndaquil
A Fire Mouse Pokemon. It's a timid creature that often curls up into a ball. When threatened, it flares up the flames on its back to scare off enemies. When it's angry, it can produce powerful flames, but when it's tired, it has trouble producing fire and suffers from incomplete combustion. When it levels up, it evolves into Quilava. It's squinty eyes are adorable. 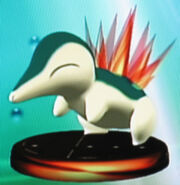