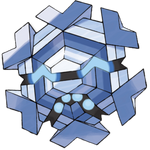 Cryogonal (フリージオ, Freegeo) is an Ice-type Pokémon from the Pokémon series.

Cryogonal debuted in the Generation V games, Pokemon Black and White. It resembles a living snowflake : a flat blue body, composed of ice, and is hexagonal in shape. It has deep-set eerily glowing blue eyes and an open mouth from which it forms chains of ice crystals(which are in 2 cracks on its body). Its face is always locked in this aggresive expression.

Cryogonal is literally made of ice as it is born from snow clouds and vaporizes during the summer(which explains why it is rarely seen at that time). It catches prey with its ice chains (which have a temperature of -148° F, like most ice types having crazily low temperature body parts) and whisks them off to another location to eat. It is categorized within the Pokédex at #615 as the "Crystallizing Pokémon". It has no evolutionary relatives and it is very rare, only found in icy areas.

The move seen in Smash 4(see below), Ice Beam, is a special move introduced in Generation 1. It has 90 base power (95 before being nerfed in Generation VI), 100% accuracy and a 10% chance of freezing its target. Cryogonal learns it naturally at level 33, and, like most other Ice-type Pokémon, can also learn it with TM13(Gen V-Gen VII) or TR05(Generation VIII, after updating Sword and Shield to version 1.3. or having the crown tundra expansion installed).

Cryogonal appears as an enemy in Smash Run it hovers in the air and attacks fighters with an Ice Beam that can freeze them the direction of the Ice Beam will either remain fixed or rotated to follow the fighter, the latter having a longer telegraph. After firing an Ice Beam, Cryogonal cannot fire another until 2.5 seconds have passed.

The Pokemon Wiki's article on Cryogonal