The Final Smash starts with Marth and Lucina raising the Falchion and Parallel Falchion respectively into the air (accompanied by Marth calling out and Lucina shouting "Time to change fate!") before dashing forward quickly in the direction they were facing, slashing at any opponent they encounter once. The move deals 62% damage, but its most definable feature is its immense knockback, which is enough to OHKO at 0%. Critical Hit also gives many freeze frames when striking an opponent.

Until the Final Smash ends, the Falchion/Parallel Falchion carries the entire hitbox, meaning that the move can even catch opponents behind them in the slash. On the ground, the move follows the ground's contours, and will immediately end without slashing at an edge, so using it on walk-off stages will cause a self-destruct, which can also be initiated if used in the air without being stopped by terrain.

Despite its power, Critical Hit is extremely predictable due to its startup and introduction sequence. It can be entirely avoided by airdodging, sidestepping (though this requires extreme precision), or simply jumping away. Moves with super armor also can stop the knockback, but the user will still take the damage.

Roy's Final Smash is different from Marth's and Lucina's. Roy slowly swings the Sword of Seals in a circular arc, with opponents making contact with the blade being pushed forward in front of Roy, before performing a downward slash that creates a fiery explosion. Roy's Critical Hit deals 40% damage with massive knockback. While Roy's Critical Hit lacks the range and OHKO potential of Lucina and Marth's Critical Hit, it is less predictable and more reliable for connecting due to trapping opponents in the introduction sequence.

Lucina's Critical Hit in Super Smash Bros. for Wii U.

The final blow of Roy's Critical Hit in Super Smash Bros. for Wii U.

Marth's Final Smash. He thrusts his sword skyward, then rushes to meet his targeted enemy with furious speed. The blow he strikes is so powerful that his foe is instantly launched off the screen. As in Fire Emblem, a window appears that shows the character's hit points dropping rapidly to zero--but this is just for effect. Smash Bros. does not use a hit-point system.

Marth raises his Exalted Falchion to the sky and then rushes forward to deal an incredibly powerful blow, almost certainly KO'ing anyone and everyone who gets hit! When it's used in the air, he'll fly forward a certain distance. On the ground, however, he'll only dash to the edge of the platform he's standing on.

In Lucina's Final Smash, she raises her sword high before dashing swiftly forward to deliver a deadly blow to whomever she makes contact with first. Even if their damage is low, this strike is powerful enough to take out foes in a single hit. Just make sure you don't dash off the stage when you use it in midair! 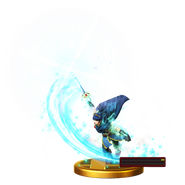 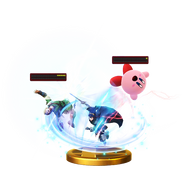 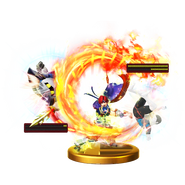 The critical hit is a staple feature of the Fire Emblem game series, which inflicts three times the standard damage if performed, accompanied by a unique attack animation. The animation for this Final Smash was likely inspired by the critical hit animations of the various Lords in the series' past. The gauge that appears represents the Hit Point system used in the series, and it has a graphical style similar to those of Fire Emblem: Radiant Dawn.

Roy's version of Critical Hit is a direct recreation of the Sword of Seals' long range attack animation from his original game.

While the health gauge shown has 60 HP units, the first few games that Marth appeared in had a maximum cap of 52 HP for player units (though enemies with beyond 60 HP existed). However, the player unit HP cap has been raised since then, usually residing around 60 (or 80 for more recent games).

Most games have this feature, possibly on RPG, MOBA and idle games.