Counter (カウンター, Counter) is Marth, Roy, Ike, Lucina and Chrom's. Down Special Move. The user enters a defensive stance, and retaliates with their own attack when struck.

The user holds their weapon in a defensive stance, which is signaled by a metallic chink. If an opponent attacks the user in their stance with a blockable attack, another metallic chink will play (further indicated by a heart monitor in SSBWU/3DS), and the user will slash at the opponent, usually hitting them unless they are out of reach.

Counter is a very powerful defensive and surprise tool, as it can be used to intercept powerful attacks, and retaliate with at least the same power quickly, making it a very viable move against powerful characters. In addition, Counter can be used to intercept recoveries, potentially knocking opponents away and preventing them from recovering. However, effectively using Counter requires precisely predicting attacks, as mistiming it or using it frequently leaves the user vulnerable to punishment due to its high ending lag. Additionally, it cannot block all attacks (such as Final Smashes), and can be negated by the use of a grab.

In Super Smash Bros. Brawl, Marth's Counter reflects back 1.1x damage, with a minimum damage of 8%.

In Super Smash Bros. for Nintendo 3DS/Wii U, Counter reflects back 1.2x damage. Additionally, Marth no longer speaks when using it.

In Super Smash Bros. Ultimate, Marth's Counter has faster startup but higher end lag. If Marth counters a powerful attack, a yellow flash is produced, and if he successfully connects the countering slash, then the Critical Hit sound effect will play. He once again speaks while countering saying, "Nice try!", "My turn!", or "Predictable!". 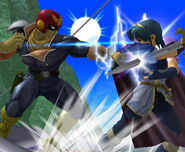 Marth's Counter in Super Smash Bros. for Wii U.
Add a photo to this gallery

Lucina's Counter functions identically to Marth's. However, Lucina's stance mirrors her battle stance from Fire Emblem Awakening, and she shouts "You're mine!" or "My turn!" upon countering an attack.

In Ultimate, Counter has slightly more end lag, but compensates with faster startup. In addition, when countering a powerful move, a yellow flash will be produced, and if the counterattack connects, the Critical Hit sound effect plays.

Lucina's Counter in Super Smash Bros. for Wii U.
Add a photo to this gallery

In Super Smash Bros. for Nintendo 3DS/Wii U, with the introduction of Custom Moves, Marth and Lucina have two variations of Counter.

Easy Counter has a bigger counter window, so Marth and Lucina are more likely to counter an incoming attack when it is used. However, the counterattack won't deal as much damage or knockback as a result.

Iai Counter will have Marth or Lucina move past the opponent and hit them with the sword from behind, much like Shulk's Vision when input past the opponent. The move is executed faster but not fast enough to hit enemy attacks that go past opponents like Wario's Bike, Fox's Fox Illusion, and even Ness's PK Thunder when used on himself. The move also deals more damage

Lucina using Counter on Marth
Add a photo to this gallery

In Super Smash Bros. for Nintendo 3DS/Wii U, Roy's Counter only deals 1.35x times the damage and he swings at a more horizontal angle. He has the second most powerful counter in this game, following Corrin. 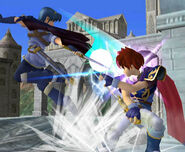 Roy's Counter in Super Smash Bros. for Wii U.
Add a photo to this gallery

Ike's Counter has a longer startup than Marth, but reflects back 1.2x damage and more knockback, with the minimum damage being 10%. Ike will shout "You're open!" or "Gotcha!" upon countering an attack.

In Super Smash Bros. for Nintendo 3DS/Wii U, Ike's Counter as faster startup and ends sooner, but the actual countering slash has more startup and less duration.

In Super Smash Bros. Ultimate, Counter activates faster, but its endlag, as well as the endlag of the countering slash, is slower. When successfully connecting, Counter produces blue flames, which alludes to Ike's title, "Hero of the Blue Flames." Ike now says, "Gotcha!" when wearing his Path of Radiance outfit, or "Amateur!" when in his Radiant Dawn alternate.

Ike's Counter in Super Smash Bros. for Wii U.
Add a photo to this gallery

In Super Smash Bros. for Nintendo 3DS /Wii U, with the introduction of Custom Moves, Ike has two variations of Counter.

Paralyzing Counter is one of Ike's Down Special Moves that can be used via customizations. It's a counter that paralyzes enemies.

Paralyzing Counter is useful as a KO set-up as when it paralyzes opponents they are briefly left open to attack. The paralysis doesn't last long enough to follow up with Ike's slow smash attacks, but his tilts, jab, and grab are useful follow-ups to this counterattack. The move deals good damage but doesn't launch opponents, which means that it cannot be relied on solely for closing out stocks, instead requiring Ike to attack the opponent with one of his quicker KO moves like jab or up tilt to KO the opponent.

Smash Counter is one of Ike's Down Special Move that can be used via customizations. The move delivers a slower, more powerful attack when countering.

Smash Counter is a very powerful counter-attack. When hit with an attack while in the countering stance, Ike will pause a moment before smashing the opponent with his sword; this brief window in between the counter stance and the counter-attack can allow for opponents to escape, and the move is useless against moves that go past Ike like Fox's Fox Illusion. The counter attack has high launch and KO power though, capable of KO'ing at very early percentages. This high launch and KO power makes it especially useful at the edge for countering edge attacks since the high launch from the edge of the stage is very likely to KO an opponent.

Smash Counter
Add a photo to this gallery

Chrom's Counter functions similarly to Roy's, albeit it does not possess a flame hitbox when connecting, as well as deals slightly more knocback, improving its KO potential. When countering, Chrom may shout, "Not today!" or "No way!".

This move seems to be based on the fact that, in the Fire Emblem games, characters can counterattack when an enemy attacks them. However, starting from Fire Emblem: Path of Radiance, a battle skill of the same name was made. In Path of Radiance and Radiant Dawn the skill inflicts half the damage dealt to the user back at the attacker. In Awakening, Counter inflicts the same amount damage to the attacker that the user receives as long as the user is not killed.

Retrieved from "https://supersmashbros.fandom.com/wiki/Counter?oldid=579558"
Community content is available under CC-BY-SA unless otherwise noted.