This article is about Corrin's appearance in Super Smash Bros. Ultimate. For other uses, see Corrin.

Corrin is a veteran fighter in Super Smash Bros. Ultimate, first playable in Super Smash Bros. for Nintendo 3DS and Wii U. He was confirmed to return on June 12, 2018 during E3 2018. Corrin once again retains the option to choose from either the male or female versions.

When unlocked, they are fought at Coliseum, much like Ike.

Come on screen as a dragon and reverts back to human form.

Classic Mode: Between White and Black

As its name suggests, Corrin's opponents are all in either white or black alternate costumes, referencing Corrin's struggle in choosing between Nohr and Hoshido.

Although neither gender of Corrin appears in the World of Light opening cutscene, they were vaporized and later imprisoned alongside the rest of the fighters (sans Kirby) when Galeem unleashed his beams of light.

Male Corrin was one of the many fighters that fell under Dharkon's control upon Galeem's first defeat. He is on a platform made of clouds in the Mysterious Dimension sub-area, guarded by the spirit of Azura (whose spirit battle ironically contains the default Female Corrin). 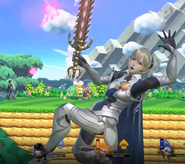