Like Robin in Fire Emblem Awakening, Corrin is the customizable avatar character in Fire Emblem Fates. However, he is also the main character of the story and has a more prominent role of an avatar character throughout the whole game. Corrin's gender(which will be assumed as male for most instances referring to the character later unless otherwise stated), physical appearance, voice, stat builds, and secondary class can be selected by the player before playing. Corrin is notably half-dragon, being able to transform parts of his body into that of a dragon, or temporarily transform into a dragon with the power of Dragonstones. Corrin and his royal families can use Dragon Vein, a power granted from the ancestral First Dragons, which can be used alter the user's surrounding terrain in a multitude of ways.

Fire Emblem Fates centers around two kingdoms: the militant kingdom of Nohr, which is where Corrin grew up after being abducted, and the peaceful kingdom of Hoshido, where Corrin was born. In the beginning of the story, Corrin becomes of age after he bests his older brother, Xander, in a practice match. King Garon of Nohr provides Corrin with the sword Ganglari to be used on the Hoshidan prisoners Kaze and Rinkah, among others. Corrin succeeds in defeating the prisoners, but refuses to kill them, due to his kind personality. Enraged, Garon has Xander kill the prisoners instead, but Corrin refuses to allow it and briefly clashes with Xander, only for the argument to end when Leo "dispatches" the prisoners, secretly weakening them enough not to be killed and convinces Garon to lessen Corrin's punishment.

Garon decides to send Corrin to inspect a Hoshidan fortress above the Bottomless Canyon to pardon his crime. However, one of Garon's men, Hans, provokes the Hoshidans into battle and knocks Gunter, one of Corrin's companions, into the abyss of the canyon. Hoshidan soldiers soon find and capture Corrin, who eventually recognize him as the long-lost member of the Hoshidan royal family. Corrin then meets his blood relatives and the songstress Azura, a former Nohrian Princess raised in Hoshido, at the capital city. However, a hooded assassin attempts to kill Corrin, with Corrin's mother, Queen Mikoto, shielding him at the cost of her life. Distraught at her death, Corrin transforms into his dragon form for the first time and goes on a rampage. During this time, invisible soldiers continue to attack Hoshido; they and the hooded assassin are driven back by Corrin and his allies. Corrin continues his rampage, but is calmed down by Azura, who sings "Lost in Thoughts All Alone" to revert him to his human form. In the aftermath, Corrin comes to possess the legendary Yato blade, which is said to belong to the one who will save the world. Corrin's families eventually meet together in battle, and Corrin is forced to side with either his adoptive family in Nohr, or his blood family in Hoshido, or choose neither side and fight them both. After the battle, the story continues with Corrin returning to his chosen family, or if he chose neither side, dropping into the Bottomless Canyon with Azura.

Corrin's starts in the Nohr Prince class, a class exclusive to him and his child, Kana. In this class, they can wield swords and Dragonstones. They can also draconically transform parts of their body to attack when attacking using Dragon Fang skill. With a Master Seal, Corrin can promote to a Nohr Noble and gain the ability to wield tomes, or to a Hoshido Noble and gain the ability to use staves. In addition to this, Corrin has a wealth of other options - he can reclass into his secondary class with a Heart Seal, his spouse's base class with a Partner Seal, or an A+ supporting character's base class with a Friendship Seal. As he is able to support almost nearly every playable character in the game, this gives him a myriad of possibilities for reclassing. Finally, he can use any of the various special reclassing items to access otherwise inaccessible classes, such as the Dread Fighter, Ballistican, or even character-specific classes like Marth's Lodestar class.

The Yato (夜刀神 Yato-no-Kami) is Corrin's weapon. It is a Katana created by the Rainbow Sage to aid humanity in the war against the First Dragons.

In Fire Emblem Fates, the Yato was one of the five legendary weapons alongside the Fujin Yumi, Raijinto, Brynhildr, and Siegfried, with the Yato being the most powerful and drawing power from its sibling weapons. Following the war, the Yato is sealed away at Shirasagi Castle Town, and loses much of its power because of the kingdoms of Hoshido and Nohr separating the Yato's sibling weapons, with Nohr possessing Brynhildr and Siegfried and Hoshido taking Fujin Yumi and Raijinto.

Corrin uses the Omega Yato incarnation of the weapon for his neutral attacks, tilts, neutral, forward, up aerial, pummel, as well as when he is charging his Forward Smash. 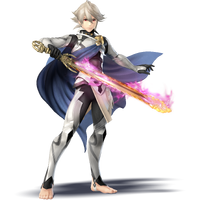 Corrin joins the battle as a downloadable newcomer in Super Smash Bros. for Nintendo 3DS and Wii U, being released on February 3rd, 2016, alongside Bayonetta. Instead of being bundled with a new stage, like with the other DLC newcomers, two new music tracks, the original and an arranged version of the main theme of Fire Emblem Fates, "Lost in Thoughts All Alone", for Coliseum and Castle Siege will be unlocked alongside Corrin.

Corrin mostly fights using the Omega Yato, the final form the Yato blade from Fire Emblem Fates: Revelation, along with having the ability to transform parts of his body into those of a dragon, which gives him more range and deals more damage at the tip. His Final Smash is Torrential Roar, in which he fully transforms into a dragon to catch opponents and blow them away by a roaring a stream of water.

Corrin
Corrin joins the battle from Fire Emblem Fates. Born in Hoshido but kidnapped by Nohr at a young age, Corrin was brought up by Nohrian royalty. Descended from the First Dragons, Corrin has the power to transform into a dragon. In Smash, Corrin can change parts of the body into lance-like hands and feet that have a long reach that deal more damage at the tips.

Corrin (Alt.)
Corrin's side special, Dragon Lunge, is no normal attack–skewer a surface with a lance-like arm, and it will suspend you in the air. Pin an enemy while doing this, and you can keep them in place and then follow up with a flying kick forward or back or just jump up. You can only thrust the lance once before landing. 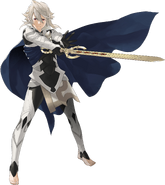 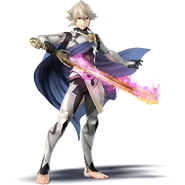 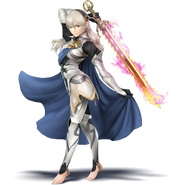 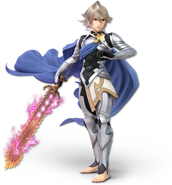 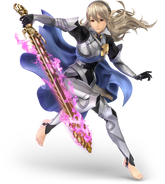