Cook Kirby is one of Kirby's copy abilities from his series of games and is his Final Smash in Super Smash Bros. Brawl. Kirby puts on a chef's hat and "rings" a frying pan. Everything on screen within a limited range, including items, most activated Assist Trophies and Pokémon, and players, are sucked into the pot and cooked. After a while, the players and various items are shot out. While powerful (about 34% damage), it has the potential drawback of allowing those hit by the attack to use the items that come out with them. Note: The more damage enemies have the harder it is to avoid (i.e. if Kirby vs. Link with link at 200+ damage he will be sucked into the pot easier and from a farther distance). Also, it can suck in enemies through impassable walls, floors, stars, etc. Oddly, this move will even suck in and destroy Pikmin, regardless if they are on Kirby's team or not.

Interestingly, the Japanese update for the move featured a song (Shaberu! DS Oryouri NAVI), while other languages did not. The song is from a Japan-only game, so the reference would likely have been missed by players outside of Japan. Nonetheless, the song is obtainable in the English version of the game as an unlockable track.

The move is based on Kirby's Cook ability from Kirby Super Star. While not able to damage bosses like other one-time-use powers, it was able to suck in all minor enemies to turn them into healing food items.

Kirby in chef's garb. When Kirby throws on his chef's hat, a giant pot appears in the center of the screen. All characters, items, and even long-distance weapons are sucked into the pot. Once they've simmered a bit, food items equal to the number of things in the pot appear. Characters in the mix get blasted straight up out of the pot. 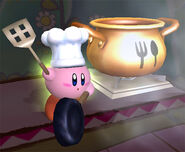 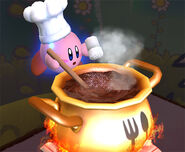 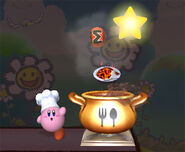 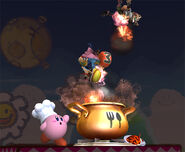 Retrieved from "https://supersmashbros.fandom.com/wiki/Cook_Kirby?oldid=129573"
Community content is available under CC-BY-SA unless otherwise noted.