Confusion (ねんりき, Nenriki?, lit. "Psychokinesis") is Mewtwo's Side Special Move . Mewtwo psychokinetically whirls the opponent in front of it around, and lets the opponent land clumsily on the ground, doing some minor damage in the process.

Confusion can reverse projectiles, similar to Fox and Falco's Reflector, Mario's Cape and Dr. Mario's Super Sheet. Unlike those moves, however, a reversed projectile has its hitbox removed, and thus is unable to harm the projectile's original owner (unless it has a secondary effect, like the bombs of Link, Young Link and Peach). It also cannot reflect Thunder Jolt unless used at the exact moment that the attack is used. This was changed in Wii U/3DS, where is now a full reflector, keeping the hitbox of the projectile.

Also, Confusion can be used on the ground to completely stop momentum, or in the air to add a small upward force to the rising animation or used to stall (once and then must touch the ground first) while recovering.

Confusion is widely considered a very impractical move for its lack of a really damaging or disrupting effect, and the opponent usually recovers from the tumble animation before Mewtwo recovers from its attack animation. When used on the ledges of Battlefield (SSBM), this glitch will pull the foe underneath the level, and leaves them unable to recover (unless they have multiple air jumps or a very good recovery move). 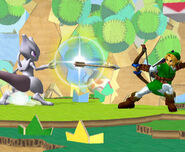 Mewtwo, redirecting one of Link's arrows back at him with Confusion.

Projectiles reflected by Confusion do not harm the thrower.

Mewtwo performing the Confusion glitch to pull Marth through the floor of Battlefield (SSBM).

Reflected projectiles can cause damage, if they have a secondary effect like exploding.

Confusion behaves very differently in the Pokémon games than in Super Smash Bros. For one, it can not reflect projectiles. It also cannot turn opponents around. In the Pokémon games, Confusion is a weak Psychic-type attack with a base power of 50 and has an added 10% chance of confusing the opponent. Mewtwo's down special Disable, resembles Confusion much more.