Cloud is an arrogant and proud swordsman at first, claiming to be an ex-member of an elite warrior unit called SOLDIER. He assists an environmental terrorist group named AVALANCHE, a faction which his childhood friend, Tifa Lockhart, is a member of. AVALANCHE's goal is to save the planet from the hands of the ShinRa Electric Company, which drains the life-energy of the planet, known as the Lifestream, to fuel both its machines and ambitions.

Eventually, Cloud discovers that his memories are false, being instead the memories of his friend Zack Fair, who he witnessed gunned down by ShinRa troops, memories that Cloud later absorbed into his own psyche out of trauma. Both Cloud and Zack were experimented on by a ShinRa scientist named Hojo, in order to become "Sephiroth Clones". They were infused with JENOVA Cells (genetic code of an alien) and Mako (the industrialized energy from the Lifestream). Both were labelled as failures and fled.

With the help of his friends, Cloud learns there is more to being a hero than possessing physical strength and fame and comes to terms with his own fractured mental state and self, trying to find a meaning in his existence and stop the plans of Sephiroth, a former legendary member of SOLDIER, who has a plan to purge the world by summoning a large meteor to crush the earth.

Cloud's weapon is known as the Buster Sword, an incredibly powerful bladed weapon that is massive in size; Cloud being able to lift the sword is a feat of strength all on its own. The Buster Sword is capable of carrying out attacks and some magic abilities provided that Materia is applied to it. The sword originally belonged to Zack, who bequeathed it to Cloud in his last moments. Zack, in turn, inherited the weapon from SOLDIER operative Angeal Hewley. 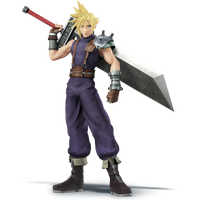 Cloud mostly fights using the Buster Sword, a giant sword given to him by his deceased friend Zack Fair. This makes most of his attacks have long range and good power, although they generally have more start-up lag to compensate. He also contains a Limit Break mechanic, which functions similarly to Little Mac's Power Meter but can also charge it manually using his down special move, Limit Charge. Once filled, Cloud can perform a Limit Break on any of his special moves and his down special move is replaced with Finishing Touch, an attack that deals 1% damage, but has enormous launching power.

Cloud
The protagonist of FINAL FANTASY VII, Cloud wields the enormous Buster Sword, a memento from his comrade Zack. Once a SOLDIER of Shinra, he now fights as a mercenary against the corporation he originally served. His decision to join AVALANCHE's insurgence, however, will transform his destiny.

Retrieved from "https://supersmashbros.fandom.com/wiki/Cloud_Strife?oldid=532352"
Community content is available under CC-BY-SA unless otherwise noted.