This article is about Cloud's appearance in Super Smash Bros. for Nintendo 3DS and Wii U. For other uses, see Cloud Strife.

Cloud (クラウド, Kuraudo) is the main character from Square-Enix's Final Fantasy VII. He is an upcoming downloadable character in Super Smash Bros. for Nintendo 3DS and Wii U. He is the sixth non-Nintendo character to appear in the series, following Solid Snake, Sonic the Hedgehog, Mega Man, Pac-Man and Ryu. He was announced right before the end of the Nintendo Direct of November 12th; and much like Ryu, a pack will be released featuring his themed stage, Midgar.

His release date and price are currently unknown. 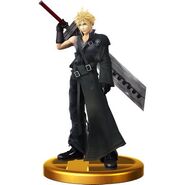 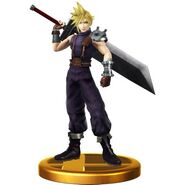 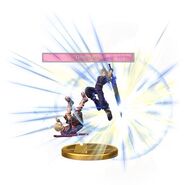 Final Smash Trophy.
Add a photo to this gallery

Retrieved from "https://supersmashbros.fandom.com/wiki/Cloud_(Super_Smash_Bros._for_Nintendo_3DS_and_Wii_U)?oldid=507101"
Community content is available under CC-BY-SA unless otherwise noted.