Cloud (Super Smash Bros. for Nintendo 3DS and Wii U)

This article is about Cloud's appearance in Super Smash Bros. for Nintendo 3DS and Wii U. For other uses, see Cloud Strife.

Takahiro Sakurai
Cloud (クラウド, Kuraudo) is a downloadable newcomer in Super Smash Bros. for Nintendo 3DS and Wii U representing the Final Fantasy universe, being the sixth third-party character. He was announced right before the end of the Nintendo Direct of November 12th; and much like Ryu, he is packed with his themed stage, Midgar.

Cloud currently ranks 2nd place on the tier list for his fast yet powerful attacks which have decent range and combo potential. He has a large variety of both long-range and short-range moves which significantly aid his approach options, and his unique Limit Break system grants Cloud fast mobility and enhanced strength with his special attacks, which are fatal if not blocked. However, his grab and recovery options are rather poor.

Cloud is a Pressure and Zoning type of fighter, capable of fighting up close and from a distance with his long reach and powerful attacks.

Cloud is a semi-heavyweight, making him difficult to KO, and possesses very quick mobility, possessing a very high dashing speed, air speed, and air acceleration, but has a high fast fall and high gravity, somewhat limiting his aerial prowess.

Cloud's greatest asset is his disjointed range, being second to Shulk's. Because of it, Cloud can easily space opponents and disrupt approaches while making his own at a safe distance, granting him versatility at close and long-range combat. Combining this range with his power grants Cloud a very versatile aerial game: neutral aerial covers a wide range around Cloud, and his directional aerials provide good options for approaching and edgeguarding, especially his down and forward aerials due to being able to Meteor Smash.

Cloud's ground game, though not nearly as potent as his aerial game, grants him good options, with his neutral attack and tilts provide good combo options due to their fast speed and decent power. Cloud's Smash attacks are potent KO options due to their range and power, though to compensate they have a long startup.

Cloud's Special Moves offer Cloud a wide variety of options. Blade Beam is a good projectile for zoning and forcing approaches despite its end lag. Cross Slash is a quick damage racker, though it requires Cloud to successfully connect all hits to succeed. Climhazzard functions like Aether, as Cloud can scoop up opponents in an ascending slash and knock them downward with an optional downward slam, making the move risky for recovery and edgeguarding.

Another powerful asset that Cloud possesses is the Limit Break mechanic. This mechanic greatly enhances Cloud's mobility, granting him very quick movement rivaling that of Sonic or Captain Falcon. In addition, Cloud can expend the gauge to power up any of his Special Moves, increasing their KO potential, and granting Cloud an additional finisher in Finishing Touch due to its high knockback.

However, Cloud is held back by many flaws. His most obvious flaw is his recovery; his high gravity and fast fall speed can put Cloud at risk when off-stage, and Climhazzard grants Cloud no horizontal distance and a short vertical distance, making it easy for opponents to knock him off-stage. In addition, Cloud's grab game is severely lackluster, possessing a short range and the inability to link into Cloud's attacks. Most importantly, despite his numerous finishers, Cloud's KO capacity is inconsistent due to his reliance on the Limit Break mechanic, which can be easily exploited if Cloud misuses a Limit Break Special Move, and therefore puts himself at risk when charging it back up.

Overall, players must fully utilize Cloud's disjointed range to disrupt approaches and attacks that can potentially knock him off-stage. In addition, the Limit Break system must be used with precision to ensure that Cloud successfully KO's an opponent without risk for punishment, and recharging must also be taken with care, as Cloud is left vulnerable regardless of the method taken.

Cloud can use the Limit Break status to improve his mobility and increase the power of his Special Moves. Similarly to Little Mac's Power Meter, whenever Cloud deals or takes damage, or alternatively uses his Down Special, a Limit gauge will fill up, which is only displayed when using Limit Charge. Cloud must deal 250% damage, take 100% damage, use Limit Charge for six seconds, or any combination of the three to fill up the gauge. There is no time limit on Limit Break status, so Cloud only reverts to his normal status only if he expends the gauge to use a Limit Break Special Move or if he is KO'd.

Cloud
The protagonist of FINAL FANTASY VII, Cloud wields the enormous Buster Sword, a memento from his comrad Zack. Once a SOLDIER of Shinra, he now fights as a mercenary against the corporation he originally served. His decision to join AVALANCHE's insurgence, however, will transform his destiny.

Omnislash
Cloud sets out to prevent Sephiroth from sending Meteor crashing into the planet. The fate of the world on his shoulders, Cloud confronts his enemy one on one. He unleashes a flurry of swift slashes before delivering the finishing blow. In Smash Bros., the final strike creates an explosion, launching nearby fighters. 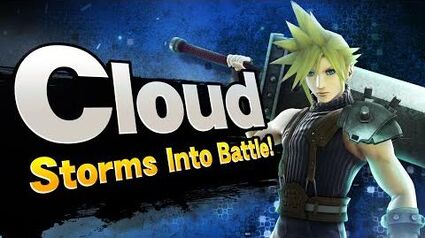 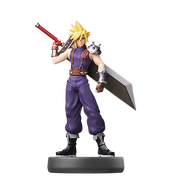 Cloud amiibo in the packaging 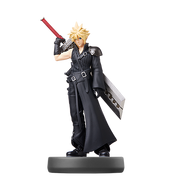 Cloud - Player 2 amiibo in the packaging

Cloud alongside with Kirby.

Cloud along with Kirby and Bayonetta.

Cloud along with Pit.