Clefairy (Japanese: ピッピ, Pippi) is a fictional creature in the Pokémon media franchise.

Clefairy makes its debut in the Super Smash Bros. series as one of the thirteen Poké Ball Pokémon that appear in the original game. When summoned, Clefairy will use Metronome, an attack that allows it to use the special attack of a random Poké Ball Pokémon (Mew included). Clefairy's attack will not harm the summoner.

Clefairy returns in Super Smash Bros. Melee with an altered form of its Metronome attack. The attacks that can be performed using the move are now limited to one of four:

As in the original, the summoner is immune to damage from its attacks.

Clefairy features as a collectible trophy, unlocked as one of the 100+ trophies that can be collected randomly during normal play, such as in the Trophy Lottery and throughout the various Single-player Regular Matches. It reads as follows:

Clefairy
Clefairy are very cute Pokemon, which makes them popular pets. However, as they're only found in a few areas, it takes a lot of work to find one. Strangely enough, legend has it that Clefairy are more active during the full moon. These Pokemon are known to use Metronome, a move that unleashes randomly selected techniques. (Pokemon Red & Blue 9/98)

In Brawl, due to having appeared in two games already and sharing its ability with Togepi, Clefairy did not return as a Poké Ball Pokémon, its role being filled by Togepi. Togepi also appeared in Super Smash Bros. Melee. 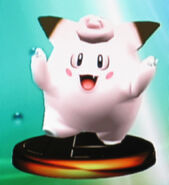 Clefairy's Trophy.
Add a photo to this gallery
Retrieved from "https://supersmashbros.fandom.com/wiki/Clefairy?oldid=583539"
Community content is available under CC-BY-SA unless otherwise noted.