This article is about Chrom's appearance in Super Smash Bros. Ultimate. For other uses, see Chrom.

Chrom is a newcomer fighter in Super Smash Bros. Ultimate from the Fire Emblem universe. He was confirmed during the August 8th Smash Direct. Chrom is the Echo Fighter of Roy (although his Soaring Slash is borrowed from Ike’s Aether), and is classified as fighter number 25ε.

For the first two methods, the player must fight and defeat Chrom on Arena Ferox.

Fundamentally, Chrom shares the same advantages of his original fighter Roy: he possesses outstanding mobility, making him a very effective unit for approaching and pressuring on the ground and in the air. Chrom also possesses disjointed reach, giving him options for spacing and disrupting approaches. All these traits combined with outstanding startup and ending data, which makes his moves difficult to anticipate or punish, makes Chrom a very effective rushdown character.

However, unlike Roy and in a similar vein to his daughter Lucina, Chrom lacks sweetspots and sourspots along his Falchion. This trait makes his damage output and knockback more consistent, and allows him to secure KOs more reliably at any range unlike Roy, who suffers from his reliance on close-combat and the polarizing power of his strong sweetspots and ineffective sourspots. Chrom also retains Roy's high damage output, while less extreme, still enables him to deal a high amount of damage in a short amount of time, which makes Chrom one of the strongest sword fighters around, and somewhat exists as a balance between Ike and Lucina in terms of mobility and raw power.

Chrom's Special Moves offer him various options for keeping opponents from approaching while dealing considerable damage. Flare Blade is a chargeable move that deals high damage, ends fast, and can be reversed to catch landings or punish whiffed moves. Double Edge Dance is a quick option for dealing damage and setting up combos, and can have its hits altered for mix-ups. Soaring Slash is a useful escape option and quickly disrupting a grounded opponent's defense, and can be a Sacrificial KO option off-stage due to its Meteor Smash hitbox. Finally, Counter provides Chrom a means of instant retaliation against attacks, with its power increasing as it intercepts more attacks.

Chrom's greatest weakness lies in his exceptionally poor recovery; possessing a purely vertical option in Soaring Slash, if Chrom gets knocked off stage he is almost guaranteed to be KO'd, as his fast falling speed and effective edgeguarding can easily place him in a position where he cannot recover. Chrom's poor recovery option also limits his ability to edgeguard opponents unless he fully commits to eliminate his own stock along with theirs. Due to Chrom possessing a consistent blade, he also lacks the ability to set up KO or combo setups with sourspots or secure KOs as early as Roy. In addition, Chrom suffers from problems associated with most sword characters, being susceptible to projectile camping and juggling due to lacking any means of countering projectiles and possessing a rather poor grab game. Chrom's sword range is also shorter than most sword fighters like Roy, which necessitates him to fight closer and putting him at risk.

To conclude, Chrom must be capable of shifting between aggression and baiting and punishing, using his mobility, range, and damage output to accomplish each gameplan. Chrom must also take care to avoid getting pressured off-stage, and must take full advantage off his mobility and spacing options to ward off aggression.

If Lucina is present during the match, Chrom will say "Our bond is stronger than steel."

Prior to the release of Ultimate, players were wary of Chrom's ability as a fighter, due to players perceiving his reliance on Soaring Slash granting him possibly one of the worst recoveries in the game, alongside Roy's mediocre standing in Smash 4 (due to Chrom being an Echo Fighter of him). Mindsets were quickly turned upon release however, as Roy's myriad of buffs allowed Chrom to perform as a highly effective swordfighter, with a powerful overall damage output and excellent speed; in addition, Chrom's access to balanced hitboxes made him less risky in comparison, and Soaring Slash also granted him a notorious KO combo out of forward aerial, allowing him to perform a sacrificial KO that would always lead to his opponent dying first. This made Chrom extremely popular during the first few months, with him being considered one of the best swordfighters in the game alongside Ike at the time.

Update 2.0.0 eventually worsened the effectiveness of Chrom's Soaring Slash combo, and his exploitable recovery has also been taken advantage of as the meta grew, which caused his player count to drop as time passed. Both Chrom and Ike would also be overlooked in favor of Lucina and Roy, who were quickly gaining prominence in competitive play as two of the best swordfighters in the game. As a result, players would eventually drop him entirely or designate him as a reliable pocket character, while some would turn to use him alongside Roy for different matchups. Regardless, while Chrom has not been as prominent of a pick as he initially was, he is still considered a very effective fighter. He is commonly used as secondary for notable professional players as a replacement for Roy or Lucina.

Chrom would experience a precipitous drop in terms of results and representation in the online meta, with a PGstats analysis of deep bracket picks suggesting that Chrom is the worst online character in the game by a large margin based on paltry win rates and pick rates. This can be attributed to the online environment exacerbating Chrom's fragile disadvantage state, particularly off-stage, making his echo counterpart Roy a much safer pick. Chrom's issues were particularly brought to light when Mr.R, who mains the character and ranked 44th in the Fall 2019 PGRU, fell early in bracket and failed to qualify for Smash World Tour 2021 in the European online qualifiers, citing his inability to play the character online as a big reason for his underperformance.

Classic Mode: Fight as One

Chrom's Classic Mode consists of him fighting a pair of fighters from a certain universe with either Robin or Lucina as an ally, as a reference to Awakening's Pair Up mechanic. However, the very first battle is a reference to Chrom's very first encounter with Lucina in Awakening. His song in the credits is Id (Purpose).

Role In World of Light

Chrom does not make a direct appearance in the opening cutscene, but as with the majority of the fighters except Kirby he is vaporized when Galeem unleashes his beams of light.

Later on when Galeem is first defeated and Dharkon emerges, Chrom is one of the fighters to fall under its control. He can be found in the Triforce of Courage section within the Sacred Land sub-area of the Dark Realm, though he can only be reached by opening a chest and reexamining it, allowing the player to be transported to Chrom's location. 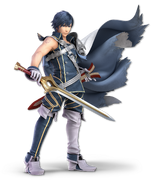 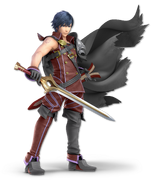 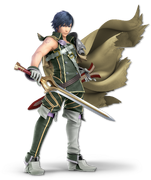 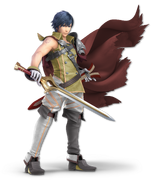 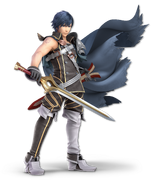 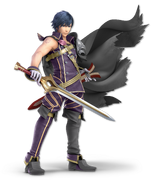 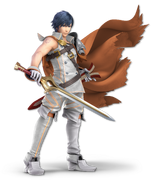 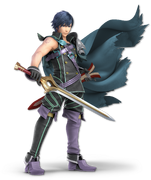 Chrom crouching with the Super Leaf alongside Wolf, Fox, and Lucario on Living Room

Chrom in his red alternate alongside Robin on Coliseum

Chrom alongside all the other Fire Emblem fighters on Arena Ferox, based off a screenshot from the Japanese Fire Emblem Twitter