The bite itself is non-damaging, except against the Subspace Army; something has to go in Wario's open mouth for it to have any effect. This acts as a grab, and can hit shielding enemies. If the button is held down, his mouth stays open briefly, making it possible to grab anyone who moves into range. While grabbed, Wario can bite by pressing the Special Move button, dealing a small amount of damage each time. The higher the enemy's damage, the more times Wario can bite. This can also be used to block Snake's recovery instead of taking a bit of damage. However, since this attack acts like a grab, the opponent can mash buttons to get released from the bite quicker.

Chomp can also be used to eat items and projectiles, up to 3 if Wario is close enough. He can even eat multiple items at once (both items will be seen in his mouth as he lifts them up to swallow them). Wario can do nothing and simply swallow the projectile or item. If it is a status or recovery item like a Superspicy Curry or a Heart Container, Wario will immediately gain its effect. Some items like a Bob-omb are damaging to Wario, dealing 6% damage, but damaging anyone in blast range for about double that. Using Chomp on items does not seem to decrease the amount of time for the Wario Waft, contrary to rumours. Any object that can be picked up (Link/Snake's bombs/grenades, Peach's Turnips, Diddy Kong's Peanuts/Banana Peels, Waddle Dees/Doos etc.) can be eaten by Chomp. The three exceptions to this are Mr. Saturn, Pokéballs (as well as any holdable Pokémon inside, such as Bonsly and Electrode), and the Smash Ball (which can't be picked up with a single button press). 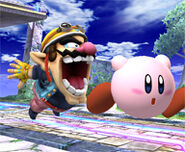 Wario about to Chomp Kirby.

In Super Smash Bros. 3DS/Wii U, Chomp can be customized to become Inhaling Chomp or Garlic Breath.

Inhaling Chomp pulls in enemies at a greater range, allowing Wario to do it from farther away, but it won't do as much damage.

Garlic Breath won't chop down on enemies, but will instead exhale at short range, making nearby opponents pass out.

This move seems to be inspired by one of Wario's abilities in Wario World, Hyper Suction, where he opens up his mouth and inhales to suck in coins. It doesn't allow him to eat up items or to chew up enemies like in Brawl, though. It may also be inspired by a microgame from the original WarioWare where Wario has to chomp on a hotdog to win.

Retrieved from "https://supersmashbros.fandom.com/wiki/Chomp?oldid=471373"
Community content is available under CC-BY-SA unless otherwise noted.