Unknown
Chespin (ハリマロン, Chespin? Harimaron in Japan) is one of the Pokémon that appears from a Poké Ball in Super Smash Bros. for Nintendo 3DS and Wii U. It first appeared in Pokémon X and Y, as the Pokémon series' sixth generation grass starter.

Chespin replaced Chikorita as the Grass type starter that appears from a Poké Ball. It uses the move Seed Bomb, launching several seeds that blast on impact and inflict an average amount of damage and knockback.

NA: Chespin, the Spiny Nut Pokémon. This Grass-type Pokémon is one of the new Pokémon you can choose when starting a new adventure. The spikes on its head could stop a truck. It can evolve into Quilladin. Its Seed Bomb move will scatter bombs around it that instantly explode.

PAL: Chespin, the Spiny Nut Pokémon. This Grass-type Pokémon is one of the ones you can choose at the start of Pokémon X and Y. The thick shell covering its head and back is so strong, it can protect Chespin's body from almost any impact. Its Seed Bomb attack will scatter bombs around it that instantly explode. 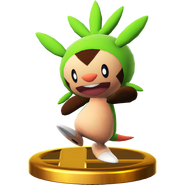