Chef is Mr. Game & Watch's Neutral Special Move. He pulls out a frying pan and tosses sausages, which fly erratically through the air.

The thrown food does low damage and not a lot of knockback, but is strong enough to cancel most moves. The angle the food is thrown affects the speed and range but is random and cannot be set by the player. Chef can be rapidly used up to five times in one session; after five pieces of food are thrown out Game & Watch must wait a second before he can send food out of the pan.

The pan is much more stronger and does decent knockback, in addition to dealing fire damage against enemies.

In Brawl, the pan tosses out more food, such as chicken legs and fish.

In Super Smash Bros. Ultimate, Mr. Game & Watch turns into the chef himself. 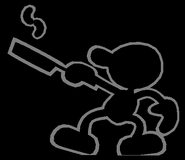 Chef in Wii U/3DS.
Add a photo to this gallery

XXL Chef is one of Mr. Game & Watch's Standard Special Moves that can be used via customizations. Mr. Game & Watch tosses giant-sized version of the food, which does more damage. However, they travel very slowly and do not have a large range.

The XXL Chef gets a massive increase in size for the projectiles tossed out. These large projectiles make for huge hitboxes and their slow speed makes them excellent for use on the edge by limiting the opponent's options, often forcing them to edge roll which Mr. Game and Watch can then punish. They also deal a lot more damage but have poor range, making the move impractical for use as a spacing tool or in neutral.

Short-Order Chef is one of Mr. Game & Watch's Standard Special Moves that can be used via customizations. Mr. Game & Watch tosses small-sized versions of the food, which flies extremely fast and has a longer range. However, the thrown food barely does any damage and almost no knockback.

The Short-Order Chef is the faster variation of the default Chef move. This faster version can be used to zone opponents better because of its greatly increased range and attack speed. However, the food is not flung as high into the air allowing the opponent to make an air approach more easily. The projectiles also deal less damage and knockback making the move poor for edge-guarding.

Chef was a Game & Watch game where the player took on the role of a chef cooking various foods by flipping them with his frying pan. The player had to keep all the food airborne until it was finished, lest it fall on the floor and promptly eaten by an awaiting mouse or be speared on a fork by a perched cat.

Chef makes an appearance in the background of Flat Zone 2; the falling food deals damage upon contact as a stage hazard.

Back in the days of the Game & Watch and the early NES years, there were a lot of games with short and simple titles—and at just four letters and one syllable, Chef is a prime example. It's all about flipping food on a frying pan without dropping any on the floor. Whether any of that food ever actually gets served to customers is a mystery...

Retrieved from "https://supersmashbros.fandom.com/wiki/Chef?oldid=581197"
Community content is available under CC-BY-SA unless otherwise noted.