Shinichiro Miki
Charizard is a playable character in Super Smash Bros. Brawl; it is one of three Pokémon that can be played through Pokémon Trainer, the other two being Squirtle and Ivysaur. Charizard originated from Pokémon Red and Blue as the final evolved form of Charmander, one of the initial Pokémon the player can choose to start out with at the beginning of the adventure.

Charizard is the fifth heaviest character in the game and is significantly different from the other heavyweights in abilities, though it is a common heavyweight in terms of stats. Charizard is also the only heavyweight Pokémon in the Super Smash Bros. series. Charizard has a surprisingly fast dashing speed for a character of its weight (tied with Pikachu), but it also has the slowest walking speed in the game. Charizard is one of only three playable characters to possess wings (the others being Pit and Meta Knight), and as such is gifted with two very small mid-air jumps and the ability to glide. Both the start-up and the actual glide are significantly slower than the other two gliders though, making it difficult to incorporate into strategies outside of safer, less-predictable recoveries and infinite horizontal recovery. Charizard is easy to hit due to being a very large target, but it can take lots of damage before getting KO'd, due to its heavyweight. Like all three of the Pokémon Trainer's Pokémon, Charizard is susceptible to stamina; after two minutes of play, its moves will be noticeably less powerful, in both damage and knockback. Given Charizard's high KO power and staying ability, however, it could be said it is the least affected by stamina of the three.

Predictably, Charizard is a powerful character with long attack range. Its Smash Attacks are all quite powerful, with its Forward Smash being capable of KOing a little below 60%. Charizard's power and range are counterbalanced by having a significant amount of ending lag after its power moves. He is also very hard to approach, due to his Neutral and Side Special Moves, Flamethrower and Rock Smash respectively. Charizard can put decent offensive pressure on the opponent with its multiple jumps, Flamethrower, its Back Aerial, its Up Tilt, and its Up Smash, and can also give out more defensive damage with moves like its Forward Tilt, Down Tilt and its Forward Aerial, which is especially useful when properly ledgehopped. Neutral Aerial and Rock Smash work both defensively and offensively, so overall Charizard has balanced attack capabilities. Despite its good range, Charizard suffers against well-spaced disjointed hitboxes; Charizard fights best at mid-close range, where swords and the like are generally superior (Marth's Forward Aerial can even cut through all of Rock Smash). Charizard's Special Moves are potent. Its Flamethrower is great at racking up the damage at close range, and it also works well as an edgeguard or stalling tactic at mid-range along with protecting himself from attacks both ranged and physical. On the downside, Charizard lacks both a long-ranged projectile and damage-racking physical moves.

Complementing the damage-racking of Flamethrower is Charizard's Side Special Move, Rock Smash. It provides Charizard with an additional, relatively-safe power move; the headbutt packs a more portable punch than its Smash Attacks, and damage dealt from the rock fragments can combine to over 50%. Sometimes, when an opponent strikes Charizard in a continuous way, Rock Smash can hit its opponent, dealing them more damage than it is receiving. Charizard's Up Special Move, Fly, has super armor frames and significant knockback, which both contribute to its recovery and can surprise high-speed, high-priority rushdown moves (like Meta Knight's glide attack) by busting through for a potential KO. However, it has a linear path and is a less than decent recovery move, more because it suffers from 30 frames of the landing lag glitch. Also, due the slow start-up, poor push-away and large landing lag of its aerials, Charizard has a very poor air game. It is even easy to tech-chase it when it lies on the ground, due to its terrible get-up rolls, being unable to roll behind a Snake who stays stationary after being Down Thrown by him. However, his great speed, powerful knockback and heavy weight makes up for most problems.

Charizard's greatest asset is its grab; Charizard's long neck gives it the second longest standing grab in the game, second only to King Dedede. The range is immensely helpful when dealing with characters who have an easier time controlling the match. At low percents, rushing in after a Forward Throw can usually net another grab, with another Throw racking up a quick 20% at the beginning of matches. Its Forward and Back Throws are also easily followed up with short-hopped Flamethrowers/Rock Smashes, depending on what the situation calls for (opponent retreating/advancing). At percents above 120%, Charizard's Down Throw is an effective KOing move, should the opponent prove difficult to hit with standard attacks.

In the end, Charizard is a very useful fighter that can play both defense and offense. However, his size can be a hindrance when evading.

Note: Charizard has the second longest non-tether grab in the game (second to King Dedede), along with a fast dash speed and good traction, giving him one of the best grab games in the game. In fact, it is for this very reason that Charizard has all around manageable matchups.

A Flame Pokémon. Its fiery breath is hot enough to burn up rocks, and its wings let it fly up to 4,600 feet into the air. It's a proud Pokémon that will never use its flame breath on an opponent weaker than itself. The flame on its tail is a barometer of how much vitality it has remaining. Its signature move, Flamethrower, is a reliable technique. 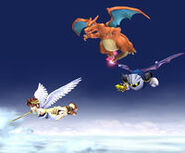 Charizard gliding, along with Pit and Meta Knight.