Official artwork of Charizard from Pokémon FireRed and LeafGreen Versions.

Charizard is an orange fire-breathing hybrid. It is a Fire/Flying-type Pokémon (but its Mega Evolution, if used with a Charizardite X, can make it Fire/Dragon) resembling a European dragon. In the original Pokémon game Pokémon (Red, Blue, the GBA remake, LeafGreen, FireRed) and Pokémon X/Y, Charmander (which evolves into Charmeleon, which ultimately evolves into Charizard) is one of three choosable starter Pokémon (it is unavailable as a starter in the Yellow version, but is obtained during normal gameplay).

Charizard is a dual Fire/Flying-type Pokémon whose main abilities lie in its Fire-type attacks. Charizard breathes out fire that reaches incredible temperatures, hot enough to melt boulders and quickly melt glaciers weighing 10,000 tons, and it is said the temperature increases as it experiences harsh battles. When expelling a blast of super hot fire, its tail flame burns more intensely, and if it becomes furious, its tail flame flares up in a whitish-blue color. It is known to cause forest fires unintentionally. However, it never turns its fiery breath on any opponent weaker than itself unless ordered to do so. Charizard's main Fire-type attacks include Flamethrower, Flare Blitz (a powerful Fire-type attack where Charizard will charge at an enemy with full-on fire but causes recoil damage to the user), and Blast Burn, an extremely powerful Fire-type attack that cause Charizard to have to recharge the next turn after using it so it shouldn't be used very often.

It flies about in search of powerful opponents, with its wings carrying it close to an altitude of 4,600 feet. Charizard can use Flying-type attacks like Air Slash and Fly, broadening its movepool. Charizard's claws are also very sharp and sturdy and Charizard can learn moves involving his/her claws including Cut and Shadow Claw. As Charizard have a dragon-like appearance, they can learn several Dragon-type attacks including Dragon Dance, Outrage, and Dragon Rage.

Despite their intimidating and strong appearance, Charizard does have a fair amount of weaknesses like Water, Electric, and its biggest weakness, the Rock-type but they are immune to Ground-type attacks because of their additional Flying-type. Charizard, unlike most other Pokémon, has two different Mega Evolutions, Mega Charizard X and Mega Charizard Y. Mega Charizard X is now a Fire/Dragon-type and is more of a physical attacker. In this Mega form, it is no longer immune to the Ground-type and is weak to Dragon-type now. Mega Charizard Y is a special based attacker and is still a Fire/Flying-type. In its Mega Y form, it has the ability Drought where the sunlight intensifies and all Fire-type attacks are powered up.

Charizard makes its first appearance in the Super Smash Bros. series as one of the thirteen Poké Ball Pokémon that can be summoned an aid the player. When summoned, it uses its trademark Flamethrower attack, rotating its head to the left and right, breathing fire upon any nearby opponents of the player who summoned it, until it disappears. Any character, excluding the summoner, will take damage from the stream of flames, as well as from making contact with Charizard itself. The flames can be reflected by Fox's Reflector, and absorbed by Ness's PSI Magnet.

Charizard reprises its role in the sequel, Super Smash Bros. Melee, again utilizing Flamethrower as its attack. Aside from a graphical update, Charizard functions identically to what it did in Smash 64, although it can now harm anyone who touches its body.

Charizard also appears as a trophy in this game, unlocked as one of the 200+ trophies that can be collected randomly during normal play, such as in the Trophy Lottery and throughout the various Single-player Regular Matches. It reads as follows:

Charizard
It's hard to believe, but this massive Flame Pokémon evolves from the tiny Charmander. Not only can it fly at heights of over 4,500 feet, but its flaming breath is hot enough to reduce almost anything to ashes in seconds. The flames at the end of a Charizard's tail are said to be a fairly accurate barometer of its power. 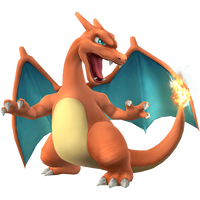 Super Smash Bros. Brawl marks the third appearance of Charizard in the series and its first as a playable character. As one of the three Pokémon used through Pokémon Trainer (the other two being Squirtle and Ivysaur), Charizard retains its Flamethrower move, delegated as its Neutral Special Move, which functions in a manner similar to Bowser's Fire Breath attack. Like in the Pokémon games Charizard is also affected by an emulation of the series' type effectiveness; it takes more damage from water attacks but less from grass attacks. Charizard also has a limited stamina, which decreases the longer it remains in battle, but slowly replenishes while it's not in play.

Charizard
A Flame Pokémon. Its fiery breath is hot enough to burn up rocks, and its wings let it fly up to 4,600 feet into the air. It's a proud Pokémon that will never use its flame breath on an opponent weaker than itself. The flame on its tail is a barometer of how much vitality it has remaining. Its signature move, Flamethrower, is a reliable technique. 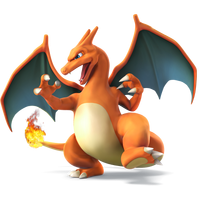 Charizard returns as a playable character in Super Smash Bros. for Nintendo 3DS and Wii U. However, in this game, Charizard is a standalone character, rather than being one of the Pokémon Trainer's Pokémon, due to the removal of in-battle transformations. As a result of this, Rock Smash replaces Pokémon Change as its Down Special Move, and it gains a new Side Special Move known as Flare Blitz, which is a powerful move that even damages itself per usage. It also gains a new Final Smash called Mega Evolution, in which it uses a Mega Stone to Mega Evolve into Mega Charizard X.

Charizard
The iconic Fire/Flying-type Pokémon. Charizard's scorching breath can melt anything in its path. It soars through the air, seeking only worthy foes to test itself against. In Smash Bros., Charizard unleashes the destructive Flare Blitz special move—a move so strong, it even injures the user!

Charizard (Alt.)
Charizard's Flamethrower attack can be sustained by holding the button. The flames will gradually die, but a short break will recharge them. Charizard's down special Rock Smash crushes a rock and hits foes with the pieces. Charizard won't flinch while crushing, but others can break the rock...

Charizard returns in Ultimate, this time as a part of the returning Pokémon Trainer's team. 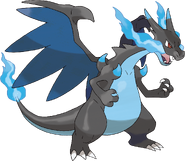