The Charge Shot are Samus's and Dark Samus's Neutral Special Move. Pressing the button causes Samus to start charging energy in her arm cannon, which she can store for later use. When the button is pressed again, she will either continue charging or fire a powerful blast of energy.

When the attack has reached maximum strength, Samus will stop charging and resume her neutral standing position, but her arm cannon will start to flash. Pressing the Special Move button in this state will let her fire the fully charged shot. Alternatively, the player can press grab, shield, or move the control stick left or right to cancel the charge and/or dodge (or simply shield or grab), and pressing the button again will resume her charge. If Samus is hit while she's charging, she will lose the stored charge.

When used in the air, Samus cannot charge; she will automatically fire either a non-charged blast, or however big a shot was charged previously. A fully charged shot does 26% damage. The attack does great knockback at higher percents and is a deadly projectile for edgeguarding. A fully charged shot can also break a Smash Ball in one hit, but only 5 seconds after the Smash Ball appears.

In Melee, her Down Throw can be used to immobilize an opponent just long enough to allow a quickly fired Charge Shot to connect with the opponent. This method is highly effective against almost every character, the only exception being Young Link because of his high rebound height.

Charge Shot is a very powerful projectile, being one of Samus' best kill moves. The Charge Shot should try to be fully charged up when it is used in order to get maximum damage and knockback from it. The Charge Shot can be used as a projectile to hit opponents from afar, but it should never be used immediately after it is completely charged up; this is often very predictable and an opponent like Fox with a reflector or Ness with PSI Magnet will instantly put up these moves to counter the Charge Shot...which is why holding onto it works so well against these characters. If a Fox holds up their reflector, dash in and attack or grab them; use one of the throw combos to hit them with the Charge Shot so that they will have less time to dodge it or react. If Ness holds out PSI Magnet, punish with a grab or even fire a Missile at him to bait it out only for him to be hit with the projectile since the missile is not energy-based. If an opponent keeps rolling to dodge missiles, Samus can throw a Charge Shot out to surprise them; if an opponent keeps jumping over her missiles, continue firing the missiles until they get to a reasonably close distance to Samus; fire out another missile to bait the jump and then jump up with the opponent and fire the Charge Shot at them; this is often a deadly maneuver. Charge Shot can also break shields and punish edge-guarders; if Samus is above the edge and will be able to recover, fire the Charge Shot at the enemy to damage and launch them away from the edge and then recover.

Samus charging the shot in Melee. 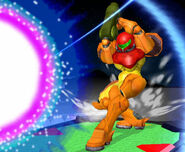 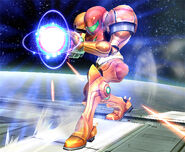 Samus charging the shot in Brawl. 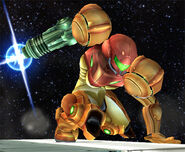 Samus's arm cannon flashes at the end, a sign that her power beam is fully charged.

Samus using Charge Shot in Super Smash Bros. Wii U
Add a photo to this gallery

In Super Smash Bros. 3DS/Wii U, Charge Shot can be customized to two other attacks.

Dense Charge Shot is Samus' Neutral Special Move that can be used via customization. Samus fires a bigger shot that does more damage, but goes slower and has less range.

The Dense Charge Shot, despite being slow and lacking range, is quite versatile. The larger size of the projectile can make it harder to dodge at close range, and Samus possesses a multitude of moves and combos that can easily integrate a Dense Charge Shot at close range, namely her down throw. The move takes longer to charge, but Samus can start charging a new one right after firing the shot, even while it is still out, so Samus can use the Dense Charge Shot as a sort of barricade so that she can safely charge another one or can even fire out multiple smaller shots to create a wall of energy blasts that will be difficult for an opponent to maneuver around. Since it stays out for so long and is so large, it can be used at the edge to deter recovering opponents. The projectile itself also deals more damage and launch and is a great kill move.

Melee Charge Shot is Charge Shot's other customization. Samus fires a point-blank shot that is not a projectile, but its range will increase if charged.

The Melee Charge Shot is not actually a shot at all, not firing as a projectile but rather as a point-blank energy burst that deals good damage and knockback but has severely less range. However, because of its close range, it can easily be integrated into combos as a combo finisher.

If she didn't start out with it, the Charge Beam (as it is aptly called in all Metroid games, due to it being one, unlike in the Super Smash Bros. series, where it is depicted as a progressively larger ball of energy) was one of the first power-ups Samus would get in the Metroid games, starting with Super Metroid. A fully charged Beam's shot would become Samus' only way of damaging certain bosses should she run out of Missiles. In Metroid Prime, Charge Beams can be used to clear debris blocking Samus' path, or to suck in nearby Energy Balls and Ammo Energy, as well as being the starting point for Charge Combos such as with the Super Missile making a flamethrower. In none of these situations, Samus can save a charge for later as is done in the Super Smash Bros. series, though she can continue charging for any length of time (up to a limit) and just hold it (effectively working the same way) as well as begin charging while in motion or in the air, and charging much faster.

In Brawl, Samus is capable of interrupting the charge of the attack by pressing the shield button. Since it's possible to go directly into a jump while shielding, Charge Canceling can be used to fake out an opponent by allowing them to approach while charging, only to find themselves attacked by an aerial. Because the shield button was held down to cancel the shot, many players that are just learning the basics of this technique can only perform an aerial Grapple Beam afterwards, since they do not let go of the shield button quickly enough. However, with fast timing, it becomes possible to perform any action that is possible at any other given time that Samus would be airborne.

As an added bonus, the amount of time the Charge Shot had been charged is still retained after canceling via shield, just like if the player were to cancel it via a roll.

Retrieved from "https://supersmashbros.fandom.com/wiki/Charge_Shot?oldid=569871"
Community content is available under CC-BY-SA unless otherwise noted.