Chansey, known in Japan as Lucky (ラッキー, Rakkī), is a fictional creature in the Pokémon media franchise.

Chansey makes its first debut in Super Smash Bros., using Softboiled as its "attack". During each appearance, it will give up to three eggs which contain items in them.

Chansey also appears in the Saffron City stage and gives a single egg when it appears out of the door of the Silph Building (unless items have been turned off). If a character touches this Chansey, it will be healed for 5% damage. Chansey can be KO'd by characters and by items; however, there is no reward for doing so.

Chansey makes another appearance in Super Smash Bros. Melee. Chansey's attributes are identical to those from the previous game, except now it gives up to five eggs. These eggs, being normal eggs, will either heal, contain an item, or explode. Chansey's move is one of the few ways eggs appear on a stage, since the only way they appear is as an item that appears commonly on Yoshi's stages.

A giant balloon of Chansey (in actuality, the 3D model of Chansey used in Pokémon Stadium for Nintendo 64) is one of the many floating and bending "platforms" that comprise the Poké Floats stage. Compared to the other balloons, Chansey's balloon appears and disappears rather rapidly and jerkily.

Chansey features as a collectible trophy, unlocked as one of the trophies that can be collected randomly during normal play, such as in the Trophy Lottery and throughout the various single-player Regular Matches. It reads as follows: Renowned for its kind temperament, Chansey has been known to offer injured creatures its highly nutritious egg to aid their recovery. Legend has it that this charitable creature brings happiness to anyone who captures it. All Chansey are female, and every now and then one is found in possession of a Lucky Egg. 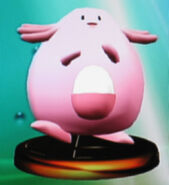 Chansey's Trophy
Add a photo to this gallery
Retrieved from "https://supersmashbros.fandom.com/wiki/Chansey?oldid=583544"
Community content is available under CC-BY-SA unless otherwise noted.