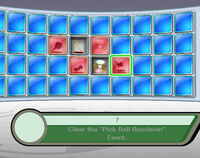 Challenges (クリアゲッター, Kuria Gettā?, Clear Getter in Japan) refers to a large, grid of blocks that keeps track of all unlockable content. Whenever something is unlocked, its place in the grid will break open, where the player will be able to view it and the requirements to unlock it. If the player unlocked a CD, they can listen to it directly from this screen. However, random pickups, Orange Cubes, and unlockable characters will not show up here. There are a total of 31 CDs in the grid.

Upon unlocking something, the squares to the left and right of the unlocked item will turn red (Brawl) or blue (3DS). The player will see a silhouette of the unlockable and while the game won't tell the player what it is, it will tell the player what they need to do to unlock it, possibly with part of the spoilers replaced with ????. This is to hide names of events or other such challenges from being revealed before the requirements to unlock those events have been fulfilled. Once the event is available, the question marks will be replaced with the correct name. Any challenge with ???? in the description currently cannot be won, with the exception of three challenges to "Unlock ????". If a square contains a Golden Hammer, the player will see it behind the silhouette.

In addition, five Golden Hammers are available for players to unlock, and by using one of these hammers, characters can immediately break open a challenge without actually having to meet its requirements. Some windows cannot be broken open via Golden Hammer in the NTSC version (notably those opened by completing Boss Battles Mode); the PAL version allows all windows to be smashed that way, despite the instructions claiming otherwise.

Every challenge that rewards a sticker can be repeated to earn more copies of the sticker.

Retrieved from "https://supersmashbros.fandom.com/wiki/Challenges?oldid=584019"
Community content is available under CC-BY-SA unless otherwise noted.