When Sheik pulls out the chain, the player has full analog control over it. The player can whip it in all directions - above and even behind Sheik's head. When a foe makes contact with the middle of the chain, they are slightly damaged. However, when the foe makes contact with the tip of the chain, they are given a small electric shock. Due to its poor damage and lag, it is almost never used in competitive play. In Brawl, the chain can act as a Tether Recovery. There is also a glitch called the Chain Jacket Glitch. It can be used to block solid projectiles like Link's or Samus' bombs. 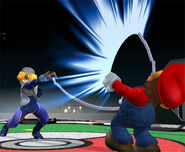 The chain is straight when first unraveled (Brawl).

The tip of the chain is electrified.

The chain being used as a tether recovery (Brawl only).
Add a photo to this gallery

Retrieved from "https://supersmashbros.fandom.com/wiki/Chain?oldid=558935"
Community content is available under CC-BY-SA unless otherwise noted.