Unveiled at E3 2006, Castle Siege is a Fire Emblem stage in Super Smash Bros. Brawl based upon themes and motifs from the series as a whole, rather than one particular title, due to the stage not resembling any game of the series.

When the match begins, players begin the fight on a small section of the unnamed castle's roof, which is bombarded by heavy fire from catapults. Eventually the floor shatters as the castle defenses waver and players fall into the throne room, which has breakable statues, four platforms and a solid floor with no drop-off points. Two platforms are held in place by destructible statues, just like Luigi's Mansion, which means that this could cause problems for projectile usage. There are also two hanging cloth emblems above serving as platforms. Players later fall again into the underground, which contains one stone platform balancing on a stone spire in the midst of a lava cavern. A part of this area is slightly elevated. After a while the stage will transition back to the top of the castle.

Rather than a specific event in Fire Emblem, this stage represents a running motif throughout the series. However, three allusions to FE9-10 (Ike's games) are made, those being:

The "changing stage" effects of Castle Siege occur at regular intervals. For example, the initial siege setting lasts until approximately 40 seconds into the match. These changes can have the effect of saving a character who would have been otherwise unable to recover. This is particularly useful for Bowser players attempting a stalled Flying Slam or Ganondorf players attempting a stalled aerial Flame Choke, among others.

A wider view of the castle.

A view of the castle's moat and entrance.

Marth and Ike standing on the top tier. 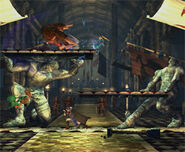 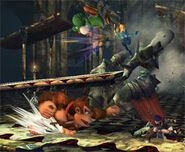 Donkey Kong destroys one of the statues. 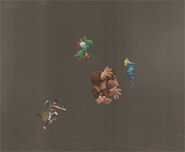 The four characters during the transition.

Marth and Ike on the underground tier.

The background of the underground tier.
Add a photo to this gallery

Retrieved from "https://supersmashbros.fandom.com/wiki/Castle_Siege?oldid=297474"
Community content is available under CC-BY-SA unless otherwise noted.