Captain Olimar is a tiny astronaut from the tiny planet Hocotate. Olimar, like the rest of his kind, is only the height of a quarter. Olimar orders and commands the Pikmin through his games.

Captain Olimar's first appearance was in the Nintendo GameCube game, Pikmin, where he is the main and only playable character. His first adventure tells that his ship, the S.S. Dolphin, crash lands on a Distant Planet. The planet contains high levels of oxygen, which is poisonous to Hocotatians, and his life support systems will allow him only 30 days to live. To help recover the 30 missing ship parts, he seeks help from the Pikmin, an indigenous plant-like alien race. There are three possible endings to this game. One where he escapes while being followed by onions, another where he lifts off while 3 Pikmin gaze at his departure. The last is when his ship can't lift off, and he is turned into a hybrid of a Pikmin.

Olimar is joined by his partner Louie in the second game, Pikmin 2. In the game, Olimar is identified as the top employee of Hocotate Freight Company. He has a wife and children, and communicates with them whenever he can. In Pikmin 2, Louie was on a delivery and was entrusted with a load of golden Pikpik carrots. On his way he got hungry and ate the whole load (he later says that a space bunny ate them), thus forcing Hocotate Freight into bankruptcy. Louie then returned to Hocotate and falsified his report to the President. Shortly after that, Olimar returned from the Distant Planet only to find that the company was 10,100 pokos (the planet's currency) in debt. Olimar and Louie then return to the Distant Planet to gather treasure to pay off the debt. Also, after obtaining 10,100 pokos, Olimar accidently leaves the Distant Planet without Louie, forcing Olimar to team up with the President to search for him.

In Pikmin 3, Olimar lands on Koppai to gather more treasure to be able to buy back the S.S. Dolphin. Towards the end of the game, he is rescued by Alph, Brittany, and Charlie (the protagonists of Pikmin 3). At the end of the credits, a red object is seen crashing into the surface, possibly being the S.S. Drake (what Olimar was being rescued in). He also makes a playable appearence in the multiplayer mode Bingo Battle.

Olimar is heavily based on Mario, as he has a similar nose, and his name, prior to translation from Japanese to English "Orima", is "Mario" backwards in Japan, since there are no letters, only symbols that dictate sounds (Ma-Ri-O and O-Ri-Ma). Likewise, the lankier Louie (whose Japanese name is "Loojie (Lugii)" is derived from Luigi in both name and body proportion.

Captain Olimar makes only one minor appearance as a trophy in Super Smash Bros. Melee.

Olimar's trophy is uniquely obtained by booting Melee while having a save file of Pikmin on the same Memory Card and gets unlocked as soon as the game is started.

Captain Olimar
The main character of the game Pikmin, Captain Olimar crash-lands on a mysterious planet after his spaceship malfunctions. In order to get off the planet, he must gather the pieces of his broken ship, but the atmosphere of the planet is poisonous to Olimar. As a result, he has to enlist the help of the native Pikmin. 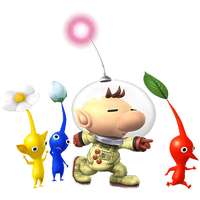 The Pikmin universe is established as a main universe in Super Smash Bros. Brawl, as Olimar debuts as a playable character. Captain Olimar is featured along with the Pikmin as a single playable character entity. Olimar is very weak on his own, and needs to summon Pikmin to his side with his Neutral Special Move, Pikmin Pluck, in order to use stronger attacks with them, as he needs at least one to use most of his attacks.

Olimar
A veteran spacefarer in the employ of Hocotate Freight. After crash-landing on an enigmatic planet, Olimar met the mysterious beings known as Pikmin. He enlisted their aid to find his spaceship parts and help him escape. Once home, he found his employer on the verge of bankruptcy. He was sent back to the Pikmin world with his partner, Louie, to repay the company debt. 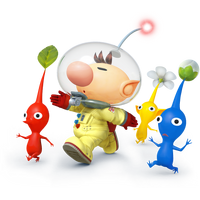 Olimar returns as a playable character in Super Smash Bros. for Nintendo 3DS and Wii U, being the first character to be confirmed playable following the E3 2013 event. His appearance remains the same as it was in the previous game, but now has a whistle at the bottom of his helmet. Instead of having six Pikmin like in Brawl, Olimar can now only pluck three Pikmin at a time, with their color order being in a fixed order (red, yellow, blue, white, and purple). His Up Special Move has also been changed to Winged Pikmin, in which a two Winged Pikmin carriy Olimar through the air, which covers less distance the more Pikmin Olimar currently has in tow. Four of Olimar's alternate costumes switches him into the protagonist of Pikmin 3, Alph.

Olimar
A veteran spaceship pilot for Hocotate Freight, Captain Olimar partners with Pikmin in Smash Bros. to help him in battle. Olimar is much stronger when he's got Pikmin with him, so keep them plucked and good to go. Pikmin abilities are based on their color—learn what each is best at!

Olimar (Alt.)
Pikmin aren't just good for attacking, you know. For example, when you throw them, they can pick up items on their way back. Only items that aren't very heavy, though! Also, if there's someone charging or shooting at you, a well-timed Pikmin throw can stop them in their tracks! Olimar, with Alph, returns as a fighter in Super Smash Bros. Ultimate.

Olimar with Luigi on Distant Planet.

A ton of Yoshi with Olimar and a Soccer Ball item on Pokémon Stadium 2.

Olimar with Kirby on Garden of Hope.

All of Olimar/Alph's alternate costumes on Venom.

R.O.B with Alph on Distant Planet.