This article is about Captain Falcon's appearance in Super Smash Bros. for Nintendo 3DS and Wii U. For other uses, see Captain Falcon.

Captain Falcon is the main protagonist of the F-Zero racing games. Despite not appearing in a game since 2004, Captain Falcon has continued to be a beloved character in the Super Smash Bros. series. Being one of the Original 12 characters which have appeared in every game, Captain Falcon was confirmed for Super Smash Bros. for 3DS and Wii U on July 14, 2014. His moveset remains practically unchanged, but he has been shown to have been greatly buffed since Brawl.

Much like in past games, Captain Falcon is a rushing character that focuses heavily on speed and punishing. Most of his attacks are fast and with good melee range. His famous "Knee Smash" and Falcon Punch are powerful tools to quickly dispatch enemies, and his acrobatic moves and high speed in both air and ground allows him to quickly move around the stage.

Advanced players can pull flashy combos or attacks with Falcon that usually involves attacking enemies off-stage. One of the most popular ones are the jumping off-stage to land a Falcon Punch or Falcon Dive; both extremely risky strategies, specially for the later. A safe off-stage combo, however, is a Up or Neutral Aerials followed by a sweetspotted Forward Aerial. A good thing about Falcon is that he tends to get plenty of options for follow ups if a move doesn't connect as it should, allowing him to always stay one step forward and leave little to none reaction time from the opponent. Neutral and Up Aerials should be the main combo tools of any Falcon player.

Captain Falcon's edge-guard has greatly improved with the addition of Up Tilt being able to Meteor Smash airborne opponents, making one of Falcon's safest options to prevent recovery when not trying to chase the opponent off-platform. The attack itself is very fast and Meteor Smashes regardless of where it hits, unlike most Meteor Smashes that require specific hitboxes. In addition since the changes of using Meteor Smash Attacks against ground opponents has changed, Up Tilt now ground-bounces opponents, leading to a higher variety of follow ups. Another safe option to edge-guarding is to grab the ledge as soon the opponent grabs it, kicking him/her away, and then jump away with a Back Aerial.

Falcon's problems, however, lies in his predictable recovery and lack of means to combat projectiles. Enemies can easily prevent him from recovering in some cases if the player is not careful. His attacks tend to lack priority, meaning he is not very good at clashing his attacks against other opponents, but rather avoiding and punishing poor advances. Additionally, both Forward and Down Aerials are not viable options for short hopping attacks unless the player is certain it will connect; those moves have high landing lag even when used in a full jump, specially for his Knee Smash.

Overall, the player must know how connect Falcon's attacks properly and learn the knockback properties of each move to follow up with efficiency.

Captain Falcon, being considered one of the worst characters in Brawl, being at the lower tiers, has received major buffs to compensate his lack of capacity from the previous game.

His appearance has also been uptade with minor details, such as a slightly rounder shoulderpad and the inclusion of his teeth showing when he opens his mouth. His eyes also are slightly smaller and now have a very thin outline which colors depends on his current costume (i.e. Pink Captain Falcon has a pink outline).

Up Taunt - Clenches his fists while surrounded by a fiery aura.

Side Taunt - Jumps back, extends his hand out, and says "Come on!"

Down Taunt - Gives a salute while saying "Show me your moves!" This taunt can be done faster if Captain Falcon is facing left.

In the F-Zero racing scene, Captain Falcon uses his Blue Falcon to win big. His origin largely a mystery, he's made his way to the Smash Bros. battlefield to prove his worth outside the cockpit. He's got speed and power, and his distinct Falcon Punch leaves a dent. Start it in the air to surprise your foes!

Captain Falcon's default down special, Falcon Kick, is no ordinary kick—it surges forward in a fiery blaze. It's a versatile attack that moves sideways on the ground and diagonally down in the air. His forward air attack, Knee Smash, can send an enemy flying for miles if hit just right. 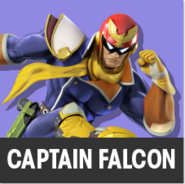 Captain Falcon about to perfom his side special, the Raptor Boost

Falcon Punch in action, the fire effect takes advantage of the Wii U graphics!

Captain Falcon about to release his Forward Smash Attack 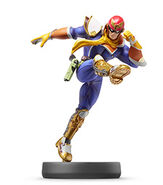 Retrieved from "https://supersmashbros.fandom.com/wiki/Captain_Falcon_(Super_Smash_Bros._for_Nintendo_3DS_and_Wii_U)?oldid=479121"
Community content is available under CC-BY-SA unless otherwise noted.