This article is about Captain Falcon's appearance in Super Smash Bros. for Nintendo 3DS and Wii U. For other uses, see Captain Falcon.

Ryō Horikawa
Captain Falcon is a starting veteran in Super Smash Bros. for Nintendo 3DS and Wii U, representing the F-Zero universe. Captain Falcon was confirmed on July 14, 2014 alongside Lucina and Robin, the 16-year anniversary of the release of F-Zero X.

Captain Falcon currently ranks 19th on the tier list, which is a massive improvement over Brawl. Captain Falcon possesses an outstanding combo game, incredible mobility, and several powerful finishers. However, his weaknesses lie in his poor recovery and short reach of attacks.

Captain Falcon is a Bait & Punish as well as a Mix-Up type of character, having a versatile combo game as well as excellent punishing options.

Captain Falcon is a heavyweight and possesses a high falling speed, which can make it risky to be offstage, but gives him excellent endurance. In addition, Captain Falcon has a very fast air speed and the second fastest dash, which gives him outstanding mobility and capable of keeping up with fast characters despite his weight.

Captain Falcon's combo game is one of the most versatile in the game, with the majority of his moves having a fast startup and ending quickly, as well as deal low knockback. All these attributes grant Captain Falcon the ability to link many moves together, as well as make them safe for using without fear of punishment. His moves are also supplemented by a good grab game, as his dash grab has the longest reach, as well as his down and forward throws being excellent starting options.

Captain Falcon's Special Moves are useful options for combo starters and finishers. Falcon Punch is his signature option for securing KOs due to its large hitbox and high knockback. Raptor Boost and Falcon Kick are good rushdown options, and can cancel out projectiles. Falcon Dive can grab shielded opponents, and knock opponents away from the stage and potentially toward the upper blast line if close enough.

However, Captain Falcon's most severe flaw is his poor recovery, as Raptor Boost and Falcon Dive provide a short distance and can be intercepted easily, and making him risky to use offstage despite his moves easily securing KOs near the blast lines. Captain Falcon's moves also have a short reach, which makes it difficult to pressure zoning characters and extremely challenging to land some of his KO options, particularly his Smash attacks and Forward Aerial. Finally, Captain Falcon's combo potential can be negated by characters with greater potential and/or better recoveries, such as Bayonetta and Zero Suit Samus.

Captain Falcon was heavily buffed in the transition from Brawl. Due to the changes in hitstun, the majority of his moves have greater combo and KO potential, and the majority of his situational moves, such as grabs and tilt attacks, now have greater utility. To compensate, many of Captain Falcon's signature moves have been weakened, though the buffs more than compensate for the nerfs.

His appearance has also been updated with minor details, such as a slightly rounder shoulderpad and the inclusion of his teeth showing when he opens his mouth (although strangely, he doesn't opens his mouth during his taunts). His eyes also are slightly smaller and now have a very thin outline which colors depends on his current costume (i.e. Pink Captain Falcon has a pink outline).

◾Up Tilt – Performs an axe kick starting up near his head and ending upon impacting the ground; similar to Samus's up tilt. Known as the Heel of Shame among fans. 11%

◾Up Smash – Does a short hop and kicks upward with each leg consecutively. 19-26%

◾Forward Smash – Thrusts forward and rams with his elbow extended out. 19-26%

◾Dash Attack – Rams forwards with his elbow while running. 10%

◾Ledge Attack – Pulls himself up and then kicks along the ground with one foot. 7%

◾Get-Up Attack – Does a hand-stand and spins his legs around to kick at both sides. 6%

◾Up Aerial – Does a Flip kick, hitting in an arc over its head. Good for juggling, with high combo potential in low percentages. The end of the move has a hitbox on its feet, dealing minor knockback. 11%

◾Down Aerial – Stomps downwards with both feet. It is a powerful Meteor Smash with its' legs hitboxes. The infamous "Nipple Strike" is a powerful horizontal knockback. 14%

◾Neutral Aerial – Performs one wide kick and then a second smaller kick upon spinning around once. Good option for combos. 4% first kick, 6% second kick, 10% when both hits connect

◾Back Aerial – Does a quick punch behind him. Decent knockback. 13%

◾Pummel – Thrusts his knee into the grabbed opponent. 2% each hit

◾Forward Throw – Performs an uppercut and releases upon impact. 5%

◾Back Throw – Tosses the opponent behind him and then kicks backwards to launch them. 9%

◾Down Throw – Slams the opponent on the ground. 6%

◾Up Throw – Punches the opponent upwards. 7%

In the F-Zero racing scene, Captain Falcon uses his Blue Falcon to win big. His origin largely a mystery, he's made his way to the Smash Bros. battlefield to prove his worth outside the cockpit. He's got speed and power, and his distinct Falcon Punch leaves a dent. Start it in the air to surprise your foes!

Captain Falcon's default down special, Falcon Kick, is no ordinary kick—it surges forward in a fiery blaze. It's a versatile attack that moves sideways on the ground and diagonally down in the air. His forward air attack, Knee Smash, can send an enemy flying for miles if hit just right.

Captain Falcon's Final Smash lets him pull opponents into the middle of an F-Zero race-where competitors have been known to break the speed of sound-and run them over with his racing machine, the Blue Falcon. If he manages to grab you, there's no escape. The impact launches its victims diagonally upward. 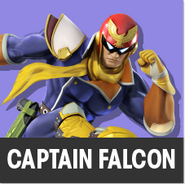 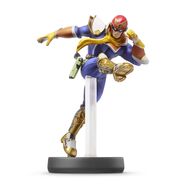 Captain Falcon about to perform his side special, the Raptor Boost

Captain Falcon about to release his Forward Smash Attack

Captain Falcon exiting the Blue Falcon for his Battle Entrance