Captain Falcon currently ranks 6th place on the tier list. He ranks high due to a superb punishing game and combo ability, in addition to the powerful Knee Smash. However, he is a fast faller and one of the heavier characters of Melee, making him vulnerable to various combos and chaingrabs. Captain Falcon is well known for his extreme speed and combo ability. His dash speed is the fastest in the game, his air speed is fast, and his falling speed is very fast. His fast falling speed allows him to SHFFL very well, and it gives him resistance to vertical KOs. However, it also shortens his recovery and makes him easy to combo and chaingrab, especially since he is heavy and large. His running speed and high lateral air speed give him the game's longest and fastest long jump, allowing him to close great distances with short hop aerials and edgeguard faraway enemies. He also has the best dash dance and moonwalk in the game. He has one of the fastest backward rolls in the game and a good forward roll, but his techrolls are slow. The trajectory of Captain Falcon's low lag aerials complement his speed, allowing him to effectively combo all characters. Captain Falcon has one of the best out-of-grab games available, as well as the ability to wall jump.

Captain Falcon does have his drawbacks, however. Captain Falcon has some powerful attacks, but these moves are slow, especially for some of his grounded moves. Captain Falcon's Forward Aerial is a powerful, low-trajectory finisher, but he is reliant on it to gain early KOs. Many of his moves have very small hitboxes, meaning that it can sometimes be hard to hit opponents, especially small characters, due to their lack of lower hitboxes. Captain Falcon also lacks projectiles and a reliable way to deal with opponents' projectiles. In recovery, Falcon Dive can't grab edgehoggers, leaving him extremely vulnerable to them. To help this problem, Falcon Kick lets Captain Falcon regain his second jump. While a Captain Falcon player must be cautious of his weaknesses, he can use his power, speed and combo ability to overcome them.

In the transition from Super Smash Bros., Captain Falcon gained multiple buffs and nerfs, but was buffed overall, such as in recovery and the introduction to his famous Knee Smash.

Like some other characters, Captain Falcon was slightly changed in the PAL version of Melee.

Note: Captain Falcon and Pichu are the only characters in the game to have two different taunt animations.

Captain Falcon has some good grabs that are used to start chains and combos, most notably into his fair, which can allow for quick kills.

In addition to his normal trophy, there are two trophies about him as a fighter, unlocked by completing the Adventure and All-Star modes respectively with Captain Falcon on any difficulty.

Captain Falcon
Usually a relentless bounty hunter, Captain Falcon shifts gears to become a race pilot once the F-Zero Grand Prix begins. His beloved racer, the Blue Falcon, can exceed the speed of sound, and he knows how to drive it; he'll go down as one of the all time-greats. Now 36 years old, Captain Falcon wears his F-Zero X visor.

Captain Falcon (Smash Red)
Falcon's style is a balanced combination of raw power and speed. His attacks are slow, but when combined with Falcon's high mobility, he's a formidable combat force. The Falcon Punch packs the highest degree of destructive power, while the explosive Raptor Boost can be used to smash airborne foes into the depths.

Captain Falcon (Smash Blue)
The Knee Smash, used in midair on foes in front of you, is slow and has a short reach, but if it connects, it'll send foes flying a long way on a low trajectory. Falcon uses his Falcon Dive to grab an enemy in midair and fling them away with an explosive blast. He can do this technique repeatedly without landing, so it can also be used as a recovery move. 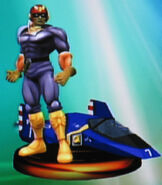 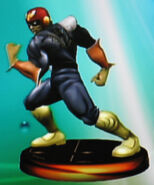