In all his appearances, Captain Falcon and his machine are touted as the most balanced and easy-to-play-with machine for that game, so players of a new F-Zero game almost always play as Captain Falcon first. He is the main character of the F-Zero series.

Captain Falcon is described as "an accomplished F-Zero pilot, a renowned and talented bounty hunter", and is also an eccentric man in his late thirties (36 in F-Zero X and Melee, 37 in F-Zero GX).

His "Captain" title is rumored to originate from his being perhaps an officer in the Internova Police Force in the past. He is a resident of Earth, coming from the city of Port Town. His bounty hunting exploits have yielded him enough of a reputation that he has gained many enemies across the galaxy; to avoid the constant danger from his adversaries, when he's not racing or bounty-hunting he lives in seclusion in his personal island chain off the coast of Port Town. His need to shield himself from outsiders borders on paranoia (albeit not necessarily unwarranted), because whenever he wins a race he has to dash home to his islands with his award money before others can get him. Living comfortably in solitude in his islands, Captain Falcon practices his F-Zero racing with a separate track built on each one of his islands.

His outfit consists of a blue, form-fitting racing suit and a red helmet with an opaque visor as well as a single pauldron on his right shoulder and a scarf around his neck. He always carries a sidearm in a holster on his right hip (although he has only been shown to use it once). When Captain Falcon removes his helmet, it is obvious that he has a scar above his left eye.

The F-Zero series' chronology has many vague elements up for debate, but it is stated by F-Zero X that Captain Falcon was involved in a huge accident that caused the suspension of the F-Zero Grand Prix; while he was hospitalized, his DNA was stolen and used by someone else to create his evil clone Blood Falcon, who races against him in hopes of taking him out. The story mode of F-Zero GX shows Captain Falcon winning several races, then saving fellow pilot Jody Summer. He ends up in a heroic role when he races against and defeats the supervillain Black Shadow, then a superior villain named Deathborn, and he goes on to even defeat the Creators of the F-Zero world.

Captain Falcon has appeared in the Smash Bros. series from the start, but as his incarnation from F-Zero X for the Nintendo 64, except that his suit is purple instead of blue.

He is an unlockable fighter, and his unlocking condition is for the player to complete the One-Player mode within 20 minutes, and defeat him in a match to earn him. He does not make an appearance in the game's One-Player mode. His entrance into a battle is to zoom in on the Blue Falcon and park for him to jump out, and the machine zooms into the background to vanish. One of his alternate costumes is colored to resemble Blood Falcon.

Captain Falcon's special moves are his Falcon Punch as his Standard Special, a slow but powerful charge-up punch attack; his Up Special is Falcon Dive, where he jumps up into the air as his first jump, and if he comes in contact with a target he'll grab it, attack with an explosion of sorts, and can use the Falcon Dive again; and his Down Special Falcon Kick, a maneuver where he shoots downward from mid-air or forward on the ground with a flaming kick extended.

A regular pilot in the great galactic race F-ZERO Grand Prix, Captain Falcon is skilled at collecting prize money. Much about his past remains hidden in shadow, but it's clear that many a villain hold a powerful grudge against him.

Captain Falcon makes a return appearance in the sequel, still in his incarnation from F-Zero X. This time, he is a default fighter, and as before, one of his alternate costumes is Blood Falcon in both coloration and the logo on his suit's back. His new Side Special move is Raptor Boost, a rushing uppercut attack which can Meteor Smash opponents only if they're below him.

By tradition, Captain Falcon, as a playable character, is featured on his personal 3 trophies. His normal trophy is acquired by beating the Classic mode with Captain Falcon on any difficulty, and his Smash Red and Smash Blue trophies are acquired the same way by beating the Adventure and All-Star modes, respectively. Note that his normal trophy depicts both Falcon and his vehicle, the Blue Falcon, and that his Smash Blue trophy depicts his Blood Falcon alternate costume.

Captain Falcon
Usually a relentless bounty hunter, Captain Falcon shifts gears to become a race pilot once the F-Zero Grand Prix begins. His beloved racer, the Blue Falcon, can exceed the speed of sound, and he knows how to drive it; he'll go down as one of the all-time greats. Now 36 years old, Captain Falcon wears his F-Zero X visor.

Captain Falcon [Smash]
Falcon's style is a balanced combination of raw power and speed. His attacks are slow, but when combined with Falcon's high mobility, he's a formidable combat force. The Falcon Punch packs the highest degree of destructive power, while the explosive Raptor Boost can be used to smash airborne foes into the depths.

Captain Falcon [Smash]
The Knee Smash, used in midair on foes in front of you, is slow and has a short reach, but if it connects, it'll send foes flying a long way on a low trajectory. Falcon uses his Falcon Dive to grab an enemy in midair and fling them away with an explosive blast. He can do this technique repeatedly without landing, so it can also be used as a recovery move. 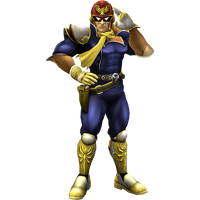 In Super Smash Bros. Brawl, he has reverted to secret character status, and has since lost his title of fastest character to Sonic.

His moves are largely unchanged from the previous games, except he can do a reverse Falcon Punch. His Final Smash is his Blue Falcon, which he calls for and then rams into opponents. His home stages are Port Town Aero Dive and Big Blue.

Captain Falcon
A skilled F-Zero pilot and resourceful bounty hunter. All that's known of his past is that he hails from Port Town. He's won fame and fortune outracing his opponents in his beloved Blue Falcon. His incredible athleticism and never-say-die attitude makes him the pilot to turn to in times of trouble. 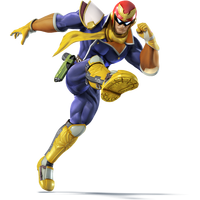 Captain Falcon returns as a veteran in the fourth and fifth installment of the Smash Bros. series revealed alongside Robin and Lucina. Continuing the pattern between his availability statuses, he is now a default character like in Melee. Compared to his appearance in Brawl, Captain Falcon has been buffed in a lot of areas (including being able to still perform the Reverse Falcon Punch), but now suffers more startup and ending lag from his more powerful attacks. In the Nintendo 3DS version, he has a new home stage titled Mute City, which is based on his debut game, F-Zero on the SNES complete with 16-bit graphics.

Captain Falcon
In the F-Zero racing scene, Captain Falcon uses his Blue Falcon to win big. His origin largely a mystery, he's made his way to the Smash Bros. battlefield to prove his worth outside the cockpit. He's got speed and power, and his distinct Falcon Punch leaves a dent. Start it in the air to surprise your foes!

Captain Falcon (Alt.)
Captain Falcon's default down special, Falcon Kick, is no ordinary kick—it surges forward in a fiery blaze. It's a versatile attack that moves sideways on the ground and diagonally down in the air. His forward air attack, Knee Smash, can send an enemy flying for miles if hit just right.

Captain Falcon returns as a veteran in the latest installment of the Smash Bros. series. He reprises his role as an unlockable character.