This article is about Byleth’s appearance in Super Smash Bros. Ultimate. For other uses, see Byleth.

Byleth is a newcomer fighter in Super Smash Bros. Ultimate game. Their inclusion was revealed in the character presentation through the Nintendo Direct on January 16, 2020. They are the fifth and last fighter announced for the first volume of the Fighters Pass and were released on January 28th, 2020.

Byleth along with Lucina in the Garreg Mach Monastery stage. 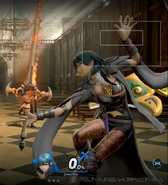