Buried is a state that characters enter under various circumstances, such as being hit by Donkey Kong's Headbutt move and being affected by a Pitfall. In this state, controls are disabled until it wears off (this point being where the once buried character will get some invincibility frames). Like other status effects, button mashing reduces its duration.

Characters can only be buried if already standing on the ground; moves that bury will usually Meteor Smash airborne opponents. Burying someone is a great way to set up a smash attack or other powerful move.

In SSBM, a buried character cannot be "unburied" by getting hit; they will remain stuck in the ground until the effect wears off. However, in SSBB, a character that takes a hard enough hit will be relieved of the bury effect and sent flying. 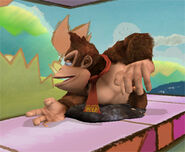 Donkey Kong is buried in the ground, making him unable to move, attack and so on for a few moments.

Link is buried in the ground.

Nana is buried in the ground, having her flower on top of her head in Super Smash Bros. Ultimate.

Two Pikachus are buried in the ground in Ultimate.
Community content is available under CC-BY-SA unless otherwise noted.
Advertisement