Bullet Seed (Japanese: Seed Machine Gun - タネマシンガン, Tanemashingan) is Ivysaur's Standard Special Move in Super Smash Bros. Brawl. With this move, Ivysaur will send a barrage of seeds ascending from its bulb, inflicting 40%-50% damage to foes trapped within the assault. 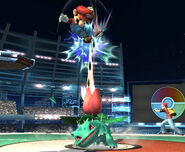 Retrieved from "https://supersmashbros.fandom.com/wiki/Bullet_Seed?oldid=386520"
Community content is available under CC-BY-SA unless otherwise noted.