Builder Mario as he appears in Super Mario Maker 2.

Charles Martinet
Builder Mario refers to an alternate form that Mario can take in the Super Mario Maker series and other spin-off games.

This form of Mario would be added as a new palette swap for him in Super Smash Bros. Ultimate. A Mii Fighter Costume modeled after the clothes is also available in the base game.

Builder Mario first appeared in the original Super Mario Maker for the Wii U (and later the Nintendo 3DS), though initially only for marketing purposes as to symbolize that game's level creation aspect. However, Mario can don the Builder outfit through a Mystery Mushroom costume in the Super Mario Bros. theme, though it must be unlocked by clearing Gnat Attack.

Builder Mario would later be reintroduced in Super Mario Maker 2, this time as a power-up gained from the Super Hammer, an item exclusive to the Super Mario 3D World theme, and can also be obtained by Luigi, Toad, and Toadette. When in Builder form, they can use a hammer to break blocks and attack enemies, capable of destroying Hard Blocks and even Thwomps, Boos, and Peepas; the hammer can also defeat Meowser less times than Fireballs or Cat Suit scratches. They are also capable of creating up to five Builder Boxes to use as platforms.

The Builder Mario helmet and outfit is a costume Mario can wear in Super Mario Odyssey. It can be purchased from the Metro Kingdom's Crazy Cap store using regional coins.

Builder Mario, Builder Toad, Builder Luigi appear as playable drivers in Mario Kart Tour; Builder Mario and Builder Toad were made available during the "Trick Tour", while Builder Luigi was made available during the "Mario vs. Luigi Tour". The Builder outfit is also an unlockable outfit for Mario and Luigi in Mario Kart Live: Home Circuit.

Builder Mario appears as one of two new alternate costume for Mario (alongside his Wedding suit from Super Mario Odyssey), this one replacing his Wario-based costume from previous installments.

A costume for the Mii Brawler is available in the base game and must be acquired separately in the Shop; the Hat is available for 900G, while the outfit is 1200G. 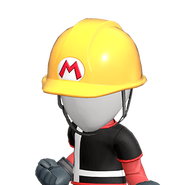 A Fighter Spirit of Builder Mario can be purchased from the Shop for 300G. As it is a Fighter Spirit, it does not have its own Spirit Battle.