Bridge of Eldin consists of a single flat walkway with no present lower blast line but walk-off blast lines at each end of the stage.

Occasionally, King Bulbin will ride from the side of the stage and inflict damage to anyone who he hits( with his arrival being indicated by a horn and sound of stampeding). He will also drop a bomb in the middle of the stage. After some time, the bomb will go off, dealing high horizontal knockback and damage to fighters close to it.

After the bomb explodes, the stage layout changes to include a chasm in the center of the stage, making it difficult for certain characters to traverse each side. After some time, a Twilight Portal will appear and span the gap, stage-spiking any fighter who was at the bottom of the stage at the time.

The stage is almost always banned in competitive settings because it is possible to walk off into the blast line, which allows for camping and easy K.Os, especially since characters like King Dedede can chain grab opponents over the edge of the blast line with little difficulty. In addition, when the center of the stage is destroyed, players - especially those with great recoveries - can camp by moving from one end to the other.

The Bridge of Eldin is known for various glitches involving using Final Smashes in the destroyed bridge area as the bridge reforms. One such minor glitch is if a character uses a Final Smash that suspends them in midair in this area while the bridge reforms around them, such as Donkey Kong's Konga Beat, they'll be able to move while airborne inside the bridge until they jump out of the bridge or fall through the bottom. The more notable glitches on this stage are the Puff Up Glitch, Diffusion Beam Glitch, and Golden Glitch.

The Bridge of Eldin appears in The Legend of Zelda: Twilight Princess, which connects the north and south sides of Kakariko Gorge. During the events of the game, the bridge is rendered unusable due to the middle section being teleported atop Gerudo Mesa in Gerudo Desert via a Twilight Portal. Later in the game, Midna and Link recover and teleport the section back. In this stage, the middle section of the Bridge of Eldin isn't teleported away, but this stage does retain how the section of the bridge is teleported back via Twilight Portal. The overall design and surroundings of the bridge look very similar to how they appeared in Twilight Princess; however, the bridge has been greatly scaled down.

In Twilight Princess, King Bulblin is a mini-boss who duels Link across the Bridge of Eldin (as well as a few other locations). When King Bulblin gets damaged he leans back from the blow. When Link defeats him, he falls into the river below. In this stage, King Bulblin can be attacked, but he does not fall into the river. He does retain how he leans back from getting hit. A fanfare blares out from a horn when King Bulblin is about to charge across the stage. The sound matches the one made by King Bulblin at two points in Twilight Princess: first to call in reinforcements for the attack on Ordon Village, and later to alert the Bulblin Riders for the horseback battle against Link. Also in Twilight Princess are common enemies called Bulblins. In this stage, a Bulblin can be seen running across the bridge. He can fall off of the bridge when the midsection of the bridge gets destroyed or when a player attacks it enough times.

In The Legend of Zelda: Majora's Mask, there is an item called a Powder Keg, which is a barrel that makes a powerful explosion when detonated. It is used to destroy large rocks or walls that block the path. In Twilight Princess, there are explosive barrels with white X's painted on them. These barrels, however, are not very powerful. The bomb that King Bulblin uses in this stage resembles the explosive barrels with the white X's in Twilight Princess, but is as powerful as the Powder Keg. 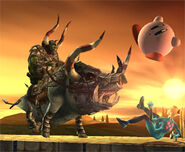 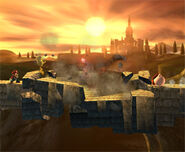 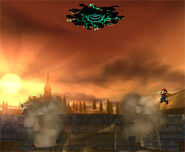 The bridge rebuilding itself.

The Omega form of Bridge of Eldin.