Bowser Jr. is Bowser's spoiled son, and he has faced Mario on multiple occasions, usually fighting by himself and assisting Bowser in a final battle. Jr. is usually seen fighting in either his Koopa Clown Car, other fighting machines, or calling many of Bowser's minions to fight for him. Jr. hates to lose and is often seen throwing a temper tantrum when Mario or someone else foils his plans. Bowser Jr. is also very naive, as shown in Super Mario Sunshine when Bowser tricked him into kidnapping Princess Peach by saying the latter was his mother.

In his first appearance, Bowser Jr. disguised himself as Shadow Mario and covered Isle Delfino with graffiti and slime, he did so in order to frame Mario and get him incarcerated, allowing Jr. to capture Peach. Jr. and his father were later defeated by Mario, and Peach was returned, sparking the rivalry between Jr. and Mario. Bowser Jr. appears once again as a mini-boss in the New Super Mario Bros. games, fighting in his Koopa Clown Car as either the mid-or end-of-world boss. He also appears in the Super Mario Galaxy series as the end boss of Worlds 1, 3, and 5, where he fights using large machinery like an airship or contraptions like the Mighty Megahammer, or by calling other creatures to fight for him, like King Kaliente or Gobblegut.

Bowser Jr. also appears in several casual Mario games, such as the Mario Party series and the Mario Sports series of games as a playable charter.

Bowser Jr.'s trademark weapon is his Magic Paintbrush, created by Professor E. Gadd. It produces toxic graffiti, which can suck in entire beings and items as seen in Super Mario Sunshine. Bowser Jr. can also controls many of Bowser's mechanical creations, and the Koopa Clown Car, which varies from having punching gloves, drills, and a compartment for bombs. Like his father, Bowser Jr. can also breathe fire.

Bowser Jr.'s only appearance in Brawl is as a collectible trophy.

Bowser Jr.
Bowser's son, who appears in Super Mario Sunshine calling Princess Peach his mother--he feels so strongly about her that he kidnaps her. Somewhat spoiled by his father, Bowser Jr. comes off as being on the selfish side. His bib is decorated with drawn-on fangs and worn like a mask--it's most likely an effort to appear more menacing.
(GCN) Super Mario Sunshine
(DS) New Super Mario Bros. 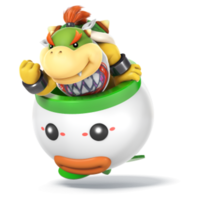 Bowser Jr. appears as a playable newcomer in Super Smash Bros. for Nintendo 3DS and Wii U. He mostly fights in his Junior Clown Car, using a variety of the car's built-in weapons to attack his opponents. He also has a unique property where if opponents hit his body, he takes 1.15x more damage than normal, while hitting the Junior Clown Car reduces the damage taken to 0.88x. His Final Smash is Shadow Mario Paint, which has him briefly transform into his Shadow Mario form and then swipes the screen with the Magic Brush, creating a large X, which hurts all opponents that it touches. His seven palette swaps replaces him with one of the seven Koopalings, with each of them using their own color scheme of the Junior Clown Car and having their own voice clips.

Bowser Jr.
Bowser's beloved, spoiled son sports a bandanna with a large mouth drawn on it. Like his father, Bowser Jr. longs to take Mario down. In Smash Bros., he'll fight from inside his heavily armed Junior Clown Car. The Clown Car takes less damage than Bowser Jr., so mind your positioning.

Bowser Jr. (Alt.)
The Clown Kart Dash special move turns the Junior Clown Car into a kart. If you change direction while driving it, it'll spin and do more damage. When you use his up special, Bowser Jr. leaps from his Junior Clown Car, dropping it on the foes below.