If Bowser is in midair when using this move, he slams to the ground with a butt-stomp. If he's on the ground doing this, he will leap forward diagonally before performing the butt-stomp. Unlike Yoshi, who can perform the Yoshi Bomb, which will produce disruptive stars upon landing, Bowser will not make any kind of shockwave upon impact. In Super Smash Bros. Brawl, Bowser gains some super armor and can lightly damage enemies with his claw at the start-up of the move. Note that in Super Smash Bros. Brawl, this move can be used to combo enemies.

The Bowser Bomb is also good for edgeguarding. If Bowser does it in the air and just brushes the edge, he will grab on making good for edgeguarding. This technique is good to use on people trying to recover. Also by doing this, instead of suffering lag from landing on the ground you can just grab the edge. Bowser can also use it on someone who is hanging on the edge and he will knock them off it and he will grab on instead. It is unsure whether you have to hold the direction on the analog stick according to what side the edge is on or if you can just Bowser Bomb and he will automatically grab on. 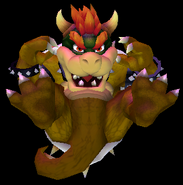 Bowser Bomb in Brawl.
Add a photo to this gallery

An Edge-canceled Bowser Bomb happens when Bowser uses his Down B onto an edge (while facing the appropriate direction). The animation and momentum of the Bowser Bomb is canceled out by the action of Bowser grabbing on to the ledge.

Turbulent Bomb is one of Bowser's Neutral Special Moves that can be used through customization. Bowser jumps up diagonally and pushes opponents with a gust of wind when he lands.

The Turbulent Bomb is a weaker version of the Bowser Bomb that deals less damage but has windboxes that push opponents a great distance away. This can make it great for edge-guarding, pushing recovering opponents away from the edge. Bowser also jumps forth farther when the move is used on the ground.

Slip Bomb is one of Bowser's Neutral Special Moves that can be used via customization. Bowser drops down and shakes the ground, causing nearby opponents to fall over. However, he does no damage on the way up.

The Slip Bomb causes nearby opponents to trip when Bowser lands on the ground. Due to the move's ending lag it can be difficult to capitalize on the tripping, but if fast enough Bowser could start a combo on the vulnerable opponent. If hit in the air, the opponent is launched away. Bowser cannot jump as far forwards and will not deal damage while leaping upwards, which can make it difficult to land the actual drop part of the move.

Slip Bomb
Add a photo to this gallery

Retrieved from "https://supersmashbros.fandom.com/wiki/Bowser_Bomb?oldid=556648"
Community content is available under CC-BY-SA unless otherwise noted.