This article is about Bowser's appearance in Super Smash Bros. Melee. For the character in other contexts, see Bowser.

Bowser (クッパ, Koopa) is a character in Super Smash Bros. Melee and is available from the start. Announced at E3 2001, a stronger form of Bowser also appears as the "final" boss in Adventure Mode. His design is based on his appearance in Super Mario 64.

Bowser is currently ranked 25th in Melee's tier list, topping over only Kirby. He is located in the G tier, the lowest ranking newcomer. This is due to his large size and weight, which make him extremely easy to combo. His moves are also sluggish, and although he does have a projectile, it does not help him against foe's projectiles, particularly Fox or Falco's lasers. He overall has terrible matchups, with two being even (Yoshi and Pichu) and the rest being negative, and considering that both of his even matchups have risen in the tier since he can be seen to have a losing matchup against everybody else in the game. 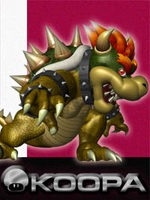 Bowser is the heaviest and largest character in the game. This means that it takes many hits to KO Bowser, but landing those hits is easy. Bowser boasts the largest shield in the game, which makes defending against these attacks much easier. As one would expect from such a large heavyweight, Bowser has very powerful, yet very slow, attacks. Bowser's Forward Aerial has great power, and his Up Aerial is one of the most powerful Aerial Attacks in the game. However, all of his aerial attacks are laggy if not L-canceled.

Bowser has decent range and large hitboxes for most of his moves, but his standing grab range is poor, resulting in an unreliable shield grab. Bowser's Side Special Move, Koopa Klaw, can grab opponents and either throw them with 1.3 times the normal throw power or slash opponents, launching them into the air. Bowser is relatively slow on both the air and the ground, and his wavedash is very slow and near useless (except when used as a Waveland) due to his very slow jumping. In fact, this very slow jumping and landing animation is one of the major (if the not the biggest) reasons he is so slow.

Bowser has good edge guarding tactics (e.g. Fire Breath), but a lot of his KOs are dependent upon his ability to edge guard opponents, which means they must first be off the edge. Bowser's Up Special Move, Whirling Fortress, is useful and very fast. However, like Donkey Kong's Spinning Kong, it mostly only goes horizontally and has poor vertical recovery. Bowser's Neutral Special Move, Fire Breath, acts as Bowser's projectile. However, Bowser lacks a reliable way to deal with opponents' projectiles.

What really hurts Bowser the most, however, is combos, or susceptibility to thereof. Bowser is one of the easiest characters (if not the easiest character) in the game to combo, due to being large, extremely heavy, and falling relatively quickly. He also has very poor combos, and the few combos that he has only work efficiently on three characters- and even then, they are not guaranteed (they can be escaped with proper DI). Also worth noting is that they are generally only two-hit combos. These combo-related troubles give Bowser much grief when in a competitive setting.

Bowser is one of the few characters who has a different name in the Japanese version of Melee. In the English version, his name is "Bowser", but in the aforementioned Japanese version, his name is "Koopa". The name "Koopa" comes from the fact that in the original Mario series, he evolved from a Koopa Troopa. Likewise, Giga Bowser's name in Japan was "Giga Koopa". All such changes of his name can be seen if the game's language is set to Japanese.

Bowser, in the PAL regions, also received a few changes; he was made 1 unit heavier in PAL regions, from 117 to 118, and errors concerning his down throw, such as its inability to hit Mr. Game & Watch and Jigglypuff were corrected. The PAL region version of the game also had a bug fix for Bowser from the American 1.2 version: he could no longer "Flame Cancel" by landing during the ending frames of Fire Breath, his neutral special move.

In addition to the normal trophy about Bowser as a character, there are two trophies about him as a fighter, which are unlocked by completing the Adventure and All-Star modes respectively with Bowser on any difficulty.

Bowser
Bowser has a long history of kidnapping Princess Peach to lure his nemesis, Mario, into traps. He leads an enormous group of mischievous creatures, not the least of which are his seven children. With outrageous strength, flammable breath, and more spikes than you can shake a Star Rod at, Bowser is a constant threat.

Bowser (Smash Red)
In many ways, Bowser is the toughest character around. Not only does he have near-impervious hide, but his great mass makes him almost impossible to hurl offscreen. Of course, his weight also makes him rather slow to maneuver, so when facing him in battle, it's best to press your attack and not give him a chance to counter.

Bowser (Smash Blue)
Bowser's Fire Breath strikes continuously, but it grows gradually smaller over time until it's barely smouldering. The Koopa Klaw rakes enemies at a distance and pulls nearby foes in close for a good gnawing. Bowser's Whirling Fortress moves laterally over the ground; it works in midair as a recovery. The Bowser Bomb is powerful and paves the way for more attacks. 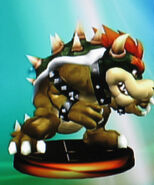 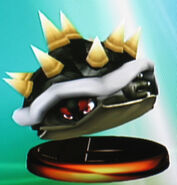 Retrieved from "https://supersmashbros.fandom.com/wiki/Bowser_(Super_Smash_Bros._Melee)?oldid=590533"
Community content is available under CC-BY-SA unless otherwise noted.